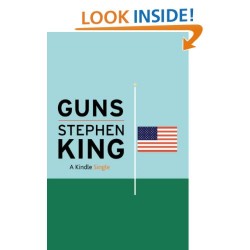 Stephen King has never been afraid of trying new ways to sell content to readers. He was one of the first mainstream authors to publish a book online (the marginally unsuccessful The Plant in 2000), one of the first to offer a Kindle Exclusive ebook (UR in 2009), and last year he even decided to try piracy as a promotional tool.

Today Amazon announced that Mr King has written and released a Kindle Single. Guns is a 22 page long essay which sums up the author’s views on firearms and gun violence in the US. “I think the issue of an America awash in guns is one every citizen has to think about,” said King. “If this helps provoke constructive debate, I’ve done my job. Once I finished writing ‘Guns’ I wanted it published quickly, and Kindle Singles provided an excellent fit.”

It’s available now exclusively to Kindle customers, and like deer nuts the cost is under a buck.

Selling short digital content (stories, articles, and novellas) as stand alone titles is not exactly a new idea, but the manner in which Amazon is going about stocking the Kindle Single Store is interesting to see.

Amazon is showing every sign of curating the eSingles they sell in the Kindle Single Store. They’re not just letting any old essay or novella in. That is a marked difference to their policies for the Kindle Store, where pretty much everything but gay content is allowed by Amazon’s homophobic sensors.

I’m not sure if anyone else has noticed this yet, but Amazon’s behavior in the Kindle Single Store is a lot closer to being a publisher than a retailer. That’s how I see the curation, anyway. They’re learning how to pick content they want to sell, and that is a skill which can be adapted to Amazon’s publishing imprints. I bet you didn’t see that one coming, did you?

More importantly, the current curation skills could also be adapted to subcompact publishing. Amazon could possibly  decide to publish a micro-periodical like The Magazine, Symbolia, or the like.

I am not claiming that this is what Amazon plans to do in the future, but it is certainly a possibility.