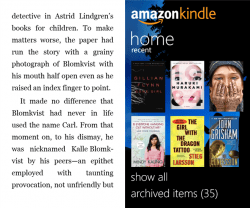 Microsoft’s latest mobile OS might currently have only about 4% of the global market but that’s enough to keep Amazon interested. They pushed out a new update today and even though the app is still missing features found in other Kindle apps (search, KF8 support, X-Ray) it is still better than a kick in the head.

A number of users have already installed the update and there seems to be an issue. In order to get the app to work correctly you first need to uninstall the existing app and then install the new app. It’s not clear whether this problem is caused by the OS or compatibility issues with the existing app, but the only users who successfully updated used that trick.