The 2012 Vaporware Tablet of the Year is back again.

Wikipad Inc has just put out a press release claiming that they have a new 7″ version of their gaming tablet in the works. The new smaller Wikipad is promised to have the same CPU and performance but with a smaller screen and at half the cost.

This tablet will run Android 4.1 on a Tegra 3 CPU with 16GB of storage and a microSD card slot. It has the same 7″ screen (1280 x 800 resolution) found on a lot of tablets, a 2MP front-facing camera, g-sensor, compass, and otherwise fairly average specs for January 2013. 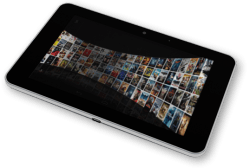 About the only interesting detail to this tablet is the gaming accessory. This $250 tablet will ship with a removable shell that adds the joysticks and buttons needed for a lot of console games as well as a pair of front-facing speakers. Unfortunately it doesn’t add a battery; now that is something I would have liked.

The shell is removable, leaving the tablet looking like the one at right. This tablet is expected to ship in Spring 2013, but your guess is as good as mine if that ever happens.

When this tablet came around the first 2 times I didn’t cover it but I did note its appearance.

The Wikipad first showed up at CES 2012, where it was being hyped as a 3d tablet. Nothing much came of that version of the tablet, in part because the 3d tablet hype died out shortly after CES 2012 (no one actually liked to use them). This tablet then popped up in late 2012 in a second incarnation, this time being touted as a gaming tablet that would be sold through Game Stop. That tablet was going to cost $500 and run Android 4.0 on a Tegra 3 CPU. It never made it to the market either.

And now the Wikipad is back for a third try. Frankly, I don’t ever expect to see this on the market. This company strikes me as being able to talk a good game but  not actually having the technical chops to produce actual hardware.