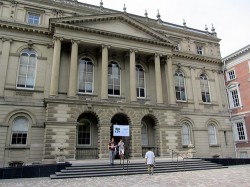 Here’s a story from north of the border.

Edwin Mellen Press, a publisher that is widely regarded as being little more than a vanity press, is now suing a McMasters University librarian (as well as the university) over a 2010 blog post.

I’ve been reading about it today and I have to say that this is one of the stranger lawsuits I have ever heard of.

The blog post originally appeared on the personal blog of Dale Askey, a professional librarian. He wrote it in 2010 (but at some point since then deleted the post from his blog). In spite of this he is still being sued, but that’s not the weird part. Mr. Askey wrote that blog post while a librarian at Kansas State University, and it was only afterwards that he happened to change jobs and start working at McMasters University in Ontario Canada.

I’m shaking my head right now because what we have here is a Canadian university being sued by a UK publisher over an article the university did not publish which was written by someone they did not employ and which is no longer posted to the internet.

Is this what it feels like to have a stroke?

For the sake of thoroughness (and to better understand this case) I found the original blog post. You can find it at the end of this PDF of Edwin Mellen’s filing (page 10).

It looks to be fairly tame stuff (I know I have said worse about US publishers) and well in line with both any reasonable 1st amendment protection as well as standards of professional behavior. With that in mind I have to wonder what exactly Edwin Mellen expects to get out of this.

They tried and failed to get the university to repudiate the librarian and the blog post, but MU is supporting Dale Askey. And so Edwin Mellen is suing the university and the librarian, claiming that this blog post cost them millions of dollars.  The lawsuit would be laughed out of court if it were filed in the US, but given that it was filed in Canada it will take some time and money to defeat Edwin Mellen’s bullying.

It’s almost as if Edwin Mellen looked at the lawsuits the RIAA filed against their customers and thought it brilliant. Clearly they think turning one negative blog post into a 3-ring media circus, with themselves as the guest of honor, was the correct response.

Whatever. I gave up trying to figure out their thought processes about 3 hours ago.