I have long held the position that LCD screens aren’t as evil as everyone claims, and that the belief that E-ink is better for you eyes is a myth. Now there is new evidence that reading on an LCD screen device like the iPad or Kindle Fire might actually take less mental effort.

A team of researchers at Johannes Gutenberg University in Mainz, Germany, have recently published a paper which shows that in spite of claims to the contrary, it was easier for a test group to read on an LCD screen. What’s more, the test group also showed approximately the same retention of the reading material, no amter whether they read on LCD, an ereader, or on paper.

Dr. Matthias Schlesewsky and his colleagues tested a group of 57 Gen X and senior citizens for this study. The comprehension and retention of the reading material was judged by asking the test subjects questions, but in order to measure how much effort the test subjects put into their reading this study had to go high tech.

The test subjects were strapped into a rig that tracked their eye movements and measured their brain waves using an EEG (electroencephalogram) machine. Past research has indicated that reading can be associated with certain patterns of brain activity, and in this study the researchers noted when they occurred and at what intensity.

The results were mixed, and I’m not sure I would place the same emphasis on them as the research team did.

First, the EEG measurements showed that the Gen X test subjects used about the same amount of mental energy while reading on all 3 materials, with the tablet requiring slightly less energy than the ereader and paper book. The eye tracking figures showed the younger group also spent about the same amount of time reading on each type of material, with the tablet taking slightly less time. 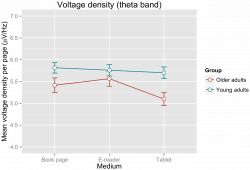 Interesting, no? The researchers have posited that the backlight on the tablet might contribute to it being easier to read. I think it merits further study, myself; I’d like to see the study repeated with a slightly different set of conditions. 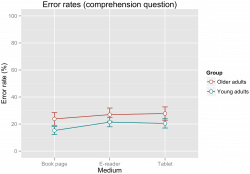 One other interesting result from this study came from the comprehension questions asked after the reading sessions. Both test groups showed a slightly higher error rate when reading on the ereader or the tablet. It’s small enough that the researchers described it as insignificant, but I disagree.

As you can see in the graph at right, going from paper to digital introduced a slightly higher error rate. Given the general hype surrounding digital textbooks at the moment, this bears further study.

Here we have a study that suggests digital textbooks are not better for students. It’s a pity that this probably won’t slow down the mad dash towards the next hot trend, but as we all know the US government rarely lets evidence get in the way of politics.