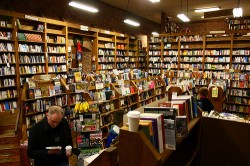 We’ve long known that it’s possible to cheat your way to a better ranking in ebookstores by buying faked reviews, but did you know that you can pull off the same trick with a print best-seller list (even a list as prestigious as that of The Wall Street Journal)?

The WSJ reported this week that a marketing company by the name of ResultSource has expanded their services to include rigging the best seller lists. They’ve developed a way to buy their way on to lists:

But the short moment of glory doesn’t always occur by luck alone. In the cases mentioned above, the authors hired a marketing firm that purchased books ahead of publication date, creating a spike in sales that landed titles on the lists. The marketing firm, San Diego-based ResultSource, charges thousands of dollars for its services in addition to the cost of the books, according to authors interviewed.

It’s not exactly a new phenomenon. Five minutes with Google found 6 different stories on gaming the best-seller lists (one, two, three, four, five, six), and I’m sure there are more examples out there.

If anything the only real news this week is that ResultSource can offer as a paid service what used to be very difficult to pull off on your own. They’ve taken the one-off scam of yesteryear and developed it into a system where they basically sell a spot on the best seller lists.

So how does it work?

ResultSource arranges to pre-buy 2,000 to 5,000 copies of a title in the weeks before it is launched. All those sales are recorded in Nielsen Bookscan in the first week that the title is available, so if the title in question is in one of the smaller niche markets (business books, for example) those several thousand sales can be enough to vault a book on to the best-seller lists.

And when it comes to business books, being able to claim the status of  best-selling author can be worth enough that the initial investment can actually pay off:

Mr. Kaplan (one author interviewed for the piece) says the best-seller status of Leapfrogging has “become part of my position as a speaker and consultant.”

I’m sure it comes as no surprise that this scam has become an accepted practice by at least some publishers. A rep for Wiley even admitted to recommending ResultSource to a small number of business authors. “We view it as a marketing tool that targets sales and the timing of those sales,” she said.

This scam works best on the best seller lists that use Bookscan data as one of their sources. The best-seller list maintained by The WSJ, for example, has probably been compromised numerous times by ResultSource, but other lists like that of The New York Times are more likely to be immune. The NYTimes creates its best seller list via a secret process, and that should make it more robust. Current industry common knowledge suggests that it’s based at least in part on book sales at select bookstores across the country. But no one knows exactly which bookstores, so the NYTimes list is safe, right?

Well, no. That list has been quite publicly gamed on at least one occasion in 1995.

So are there any lists you can trust? I doubt it. Amazon has been shown to fiddle with their best seller list, rendering their list (and the one from Digital Book World) suspect. And even Bookscann cannot be relied upon to report sales; ask anyone and they’ll tell you it has also long since stopped being an accurate reflection of the book market.

Are there any lists you can trust?