What do you know about Proximity Sensing (wrt to tablets)?  If you’re not sure what this is then now would be a good time to learn. Chances are we’re going to see tech like this on tablets in the next couple years.

I was reading up on Neonode when I wrote the post about their waterproof ereader this morning, and I happened across  this concept video on their website:

Your eyes do not deceive you. Neonode is working on ways to manipulate a device without ever touching it.

This company is best known for zForce, the IR touchscreen tech that is found on quite a few ereaders, but that’s not all they do. zForce is merely Neonode’s biggest and most visible success to date, and in fact Neonode is interested in stretching the boundaries of how we interact with our gadgets. 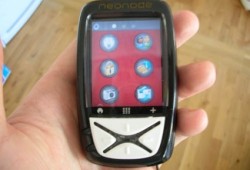 That reminds me. Neonode has been around for much longer than the time they spent working on sensor tech. For example, in 2004 they released the Neonode N1, a Windows CE based smartphone that was the first to use swipe to unlock gesture. What’s more, Neonode was the first company to patent the gesture – also in 2004.

But today we are interested in Neonode’s sensing technology. Right now Neonode is working on adapting the IR sensors used in the zForce touchscreen tech so the sensors face away from the device rather than lie next to the screen.

As you can see in the concept video above, a smartphone that is equipped with a ring of these sensors is going to be able to see where your fingers are when they are placed anywhere on the table (within a reasonable distance from the smartphone).

Moving your fingers (or anything else used as a pointer) will be picked up by the sensors and passed to the app. The game takes the sensor data and translates into in-game action.

It’s a cool concept and could be revolutionary. Not having to put your fingers on the screen will radically change mobile gaming. It’s also going to make us learn new tricks for mobile web browsing, and I must say that I am looking forward to not having to touch the screen of my tablet when I have icky stuff on my hands.

But do you know what’s even better than a concept design? That would be the working prototype attached to an iPhone:

I don’t have any info on when we will see this in a device, but Neonode say that it is ready to be integrated into smartphones and tablets right now.  And given how useful it could be, I would not be surprised to see it integrated into the next iPad (I hope).

But even if this isn’t integrated into the iPhone or iPad, chances are we will see a similar trick that makes use of the existing accelerometer. This idea was most memorably shown off by Florian Knauti, a Swiss-born London-based designer/developer, last November:

And that is using just the accelerometer in the iPhone. The later models also have a gyroscope, and now that everyone is thinking about ways to manipulate a device without touching I’m sure that smartphones and tablets are going to get more and more sensors that will make it possible.