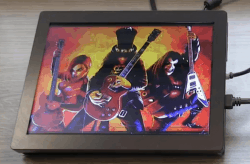 And Amazon wants to buy it.

Bloomberg is reporting this morning that Samsung is looking to sell Liquavista, their Netherlands-based screen tech research firm. According to Bloomberg’s unnamed source the rumored asking price is under $100 million. Amazon is also rumored to be interested in buying Liquavista.

I told you so.

Bloomberg is also reporting that “Samsung is considering a sale of the business after the acquisition didn’t meet its expectations”, or so their source said. That fits in closely with my supposition that Samsung wanted to sell Liquavista because Liquavista’s low-power, sunlight visible screen tech would never be an equal replacement for the high quality LCD screens now on the market. That was in the comments section of one post, which you can find here (scroll down).

Samsung is now using screens with 300 dpi and offering incredibly rich colors on their mobile devices. As cool as Liquavista’s screen tech might be, the most recent demo video showed that the screen tech was nowhere near able to offer a screen which looked as good as even the newer mid-range LCD screens. And since it is far too expensive to compete with the cheap LCD screens, there is not much of a market for it.

Pretty much the only possible market left is ereader, and that is likely why Amazon wants Liquavista.