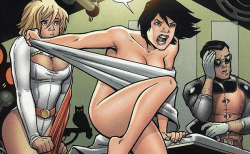 Apple, a company with a long history of censoring content, is back again today with a new purity campaign.  Reports are coming in that the digital comics distributor Izneo has had to radically prune their catalog or face banishment from iTunes.

Izneo has been selling digital comics on the iPad since they released an iPad app in mid-2010, and they successfully built a catalog of over 4000 French and Belgian titles. Business was good and everything was going fine until late Friday night when one of Apple’s censors noticed that Izneo sold adult comics. And since Apple clearly cannot allow their precious iPad to be sullied by salacious content, the censor abruptly gave Izneo 30 hours to remove all adult comics.

IDBoox broke the story earlier today, and they report that Izneo had absolutely no warning that there was a problem or guidance as to which titles needed to be removed.  All they were reportedly told by Apple was that the adult content had to go, so Izneo drastically pruned any comic that showed a breast, cleavage, and  even ones with characters evoking a suggestive gesture.

All in all 2800 titles were initially pulled from the iPad app. After removing the titles, the Izneo staff went through a second time and restored some of the less explicit titles. Izneo is back up to a catalog of 2500 titles, far fewer than they had before.

Izneo has not released any details publicly, but they have confirmed the news via Twitter (here, here).

They also have not mentioned any future plans, but so far as I can see they really have only 2 options. Either Izneo can grin and bear it, thereby putting up with Apple’s censorship, or they can find some way to get around Apple.  Izneo could always follow in the footsteps of The Financial Times and release an HTML5-based reading app, but a simpler option would be to simply stop selling comics from inside the app.

All the major ebookstores took that step last year, and besides saving the 30% vig that Apple demanded for in-app purchases the move also keeps Amazon, B&N, and other ebookstores from being hassled by Apple’s censors. Izneo would be well advised to do the same.