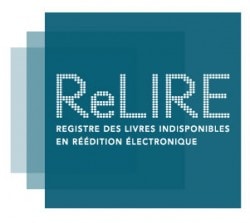 France’s national digitization project moved one step closer to fruition this week with the release of a list of 60,000 out of print works to be digitized and released as commercial ebooks.

The list is the work of ReLIRE, a new division of the Bibliothèque National de France. ReLire was created and authorized by the French Parliament in February 2012 with the purpose of identifying out of print titles from the the 20th century, digitizing them, and getting them back into the market.

The list of titles that was released this week is merely the first of the works that could be digitized, and ReLire will likely be releasing new lists in the future.

Update: Here is a later post with a more detailed look at the issues surrounding ReLire.

Digitization projects like the HathiTrust and Google Books have been getting a lot of attention in the press, but for some time now I have been neglecting to mention similar projects going on right now in other countries. My lack of coverage is troubling because projects like ReLire in France can affect authors in the US and around the world just as much as HathiTrust project.

For example, the list that was released this week includes works not just by French authors and illustrators, but also works by a number of American SF authors.  The list is garbled and a little hard to navigate, but one eagle-eyed blogger noticed that there is at least one anthology of translated SF stories included, and after a little digging she identified the authors who had contributed:

Many of the original English stories that were translated for this anthology had won awards, including Hugo, Locus, Nebula. Some had even won 3 or 4 awards, so they are not exactly forgotten works. And since the anthology is long out of print, the rights have reverted to the authors.

I’m not reporting on this list to criticize the French govt for this project, but I do want to warn authors that they need to start paying attention. In 6 months time the titles on this list will be digitized, handed over to a collection society, and released on to the ebook market.

Come September 2013, any unclaimed title still on the list will be made available as an ebook. Any revenue from sales will be managed on behalf of the copyright holder by a collection society. It’s not clear to me exactly how an author would go about getting the money that is held for them, but it is clear that compensating the creator is part of the plan.

If you’re wondering why I am writing about this with such dispassion, let me explain. First, I like digitization projects, especially involuntary ones like this. It acts as a goad for creators to do something about their out of print backlist, and that is a good thing.

I have some highly valued paper books in my collection that I don’t dare use because they are out-of print and not available as ebooks.

Take Illegal Aliens, for example. This is a 1989 SF novel by Nick Pollotta. It’s a farce with a writing quality on the level of Terry Pratchett, but due to the relative obscurity of the author and the original publisher it was almost impossible to find in print. I recall that the only copies I could find on Amazon in 2009 cost $50 or more. And that is for a cheap-quality paperback.

Fortunately this book was released as an ebook in 2010 (Nook, Kindle), forcing me to find another title to hold up as an example, but the fact remains that while it was out of print this book might as well not exist. I find that condition to be a greater tragedy than the government of France running roughshod over the rights of creators.

And I am also less than enraged by ReLire because collection societies are not exactly a new concept, and the same goes for involuntary licenses. For example, I was reminded about a month ago that there are many countries have compulsory copying levies. In those countries companies and schools pay a fee a govt agency to cover the copies they might make of copyrighted works. AccessCopyright of Canada is one such society, but it’s not the only one. Most countries have similar collection societies for music performance rights, including ASCAP here in the US, and in many circumstances those collection societies are assumed to speak for content creators (until proven otherwise).

I’m not pointing out the existing collection societies as a justification for the law that was passed in France, but I do want everyone to understand the context before freaking out.

In any case, this law has already been passed and the project has already begun. Now is the time to deal with the current situation rather than complaining about how we got here.

Authors who have works that have been published in France should check to see if they have a title on this list. And when the next lists are released, you’ll need to check them as well. You can find more info on the ReLire website.

I strongly urge authors to check for their works; I’m told that the registry maintained by ReLire is deeply flawed. Some of the issues include: