I was in the Samsung booth earlier today, checking out their screen tech, when I came across the the perfect scene to explain why Samsung sold Liquivista. 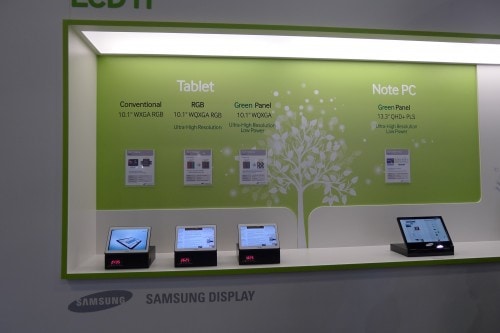 Yes, Samsung is calling an OLED screen “green”; now that was worth a giggle. They’re not producing the new screen yet but when they do it will use 30% less power than the screen in the Nexus 10 while offering the same resolution and screen quality.

The thing is, Liquavista can’t offer a similar high quality, high resolution screen. All it can offer is low-power and sunlight-visible. And since pretty is winning out over functional in the mobile device market (because Apple said so, that’s why), there was little chance that Liquavista would ever be used on Samsung’s mobile devices.

BTW, this is more or less what I said in January, but I think the label Samsung hung on their next screen was worth a comment. They chose to call this a green solution rather than deploy the truly low-power Liquavista screen tech. That more than anything should tell you that pretty won out over functional.

P.S. Samsung’s cutting edge screen tech is based on the Pentile family of patents. Here’s Wikipedia for more info.

P.P.S. The trick to reducing power in the new display is that 25% of the screen area consists of white pixels. Those pixels exist just to let more back light out so the screen looks brighter. This saves energy by letting the backlight be weaker. See Wikipedia for more info.