The iPad has no shortage of news reader apps and last week it got one more.

Erudito is a new Flipboard-inspired news reader app that offers a graphical interface that shows the hot stories from the feeds you’re following. According to the developers, it was developed specifically for readers who consume massive amounts of news.

Given that the layout is heavily focused on images and less on dense text I’m not so sure that’s true: 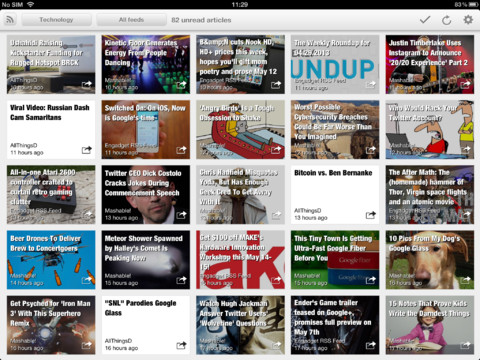 As you can see, Erudito replaces the dense line-of-text layout of Google Reader with a more visual grid layout in the style of Flipboard, Zite, and other magazine apps. While it’s more eye-catching, it’s also much less dense than Google Reader and the other news reader apps that use a more text-centric design.

On the other hand this app does offer a magazine style layout and it lets you pick the content. That puts it a step up on Zite, Flipboard, and other similar apps, IMO, so I’m sure that it will appeal to some.

Erudito is still under development, but it already supports a decent number of features out of the box.  You can of course import your account from Google Reader, or start a new account from scratch inside Erudito. Other current features include limited sharing and save-for-later options including Pocket, Readability, email, and Facebook. Articles can also be favorited so they can be read later inside the app.

Reading options include RSS feed content, Readability formatted content (stripped of images and ads), and you can even pull up the original website (handy for coping with article stubs). 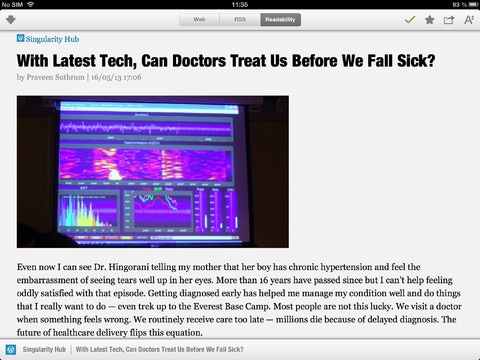 The multitude of reading options is an interesting possibility that I had not seen before, but I think I’m still going to take a pass on this app. I am firmly wedded to the idea of a more intensive text-focused news reading app. And even if I did want to go for a more image focused design, I think I would choose an app that offered but text and a Flipboard-inspired layout like the one shown above.

Feedly, for example, offers a number of different viewing modes including one that looks similar to the screenshot shown above. So does Bazqux.

TBH the main reason I am passing on this app is that Erudito is currently only available on the iPad. Future plans include an iPhone app (as well as social reading features and better feed discovery), but that’s not going to help me much either.