When PlasticLogic announced in early 2012 that they were getting out of screen tech, one of the things they planned to do was to adapt their technology and help other companies produce plastic-based electronics.

Later this week PlasticLogic plans to unveil one of the latest examples of their new partnerships. It’s a flexible image sensor which was developed in partnership with ISORG, and it’s going to be shown off at LOPE-C 2013 in Munich later this week.

ISORG describes itself as  the “pioneer company in organic photodetectors and large area image sensors”, and their latest project used PL’s organic thin-film transistor (OTFT) backplane to produce an image sensor that measures 4cm by 4 cm. 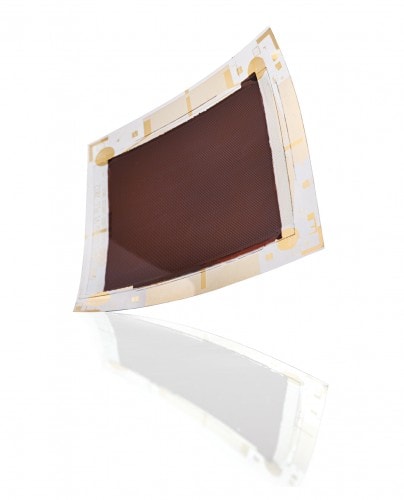 This sensor has a resolution of 94 by 95 pixels, meaning that it can detect an image with a resolution of 8,930 pixels. That might not sound like much, given that the average smartphone now ships with a 1MP digital camera, but ISORG and PlasticLogic see many other possible uses.

It opens up the possibilities for a range of new applications, based around digital image sensing, including smart packaging and sensors for medical equipment and biomedical diagnostics, security and mobile commerce (user identification by fingerprint scanning), environmental, industrial, scanning surfaces and 3D interactive user interfaces for consumer electronics (printers, smartphones, tablets, etc.).