If you were thinking about getting one of txtr’s beleaguered 5″ beagle ereader, now might be your chance.

The German ereader maker txtr is sending out emails this morning, touting a summer sale. For a limited time you can buy a txtr beagle for only 20 euros. That is two-thirds off the regular retail, finally making this ereader the cheapest on the market.

Txtr is also throwing in an alternate back plate as well as a couple free ebooks, but the deal is only available in Germany from txtr.

This device was launched in October 2012, but has only seen marginal market success. Txtr had originally planned to sell it via telecoms, where it would be bundled into new service contracts and sold to consumers with a subsidized price tag of 10 euros. Unfortunately for txtr it seems that no telecom has been interested in buying the beagle and then selling it as a subsidized device.

I’m not really surprised; the beagle is so limited in functions and ability that the telecoms and the potential end users probably found it as unappealing as I did. 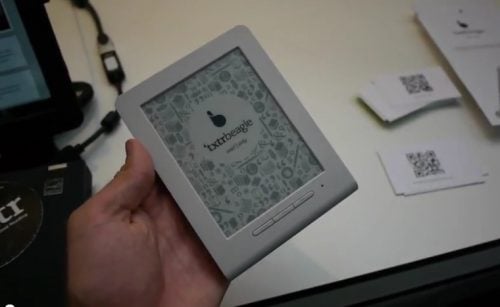 The beagle has a 5″ E-ink screen, 4GB of storage, and Bluetooth (but not Wifi or USB). This so-called ereader is better termed as a smartphone accessory because it cannot load ebooks without one. The beagle requires a relatively new Android device (smartphone or tablet) which is capable of running txtr’s reading app. Why Android? Because (according to their website) txtr has not released updated any of their other apps to include support for the beagle.

Still, the beagle is on sale in Germany for only 20 euros. That puts it far below the current prices for the Trekstor Pyrus Mini, which costs 49 euros. The beagle sale price is also far less than the price of the Kobo Mini, which is selling for 59 euros at the moment.

Update: A German ebook blogger has pointed out that both of these ereaders are on sale in Germany:

TrekStor Pyrus Mini (aka eBook Reader 4Ink) is on sale at Thalia for 35 Euros, Kobo Mini on sale at Saturn for 29 Euros.

I think we now know why the beagle went on sale, don’t you? Clearly its more capable competition are putting pressure on it by offering better prices.