Did you catch the piracy post over on Gizmodo earlier today?

One blogger posted a rant about an upcoming $100 limited edition boxed set of the Batman movies, and he griped about how the set didn’t include any digital content:

Noticeably missing from that rundown of the $100 boxed set? Any reference to digital media at all. In 2013. Does anyone actually think this makes sense?

Physical vs. Digital Is a False Dichotomy

You could argue that a movie boxed set is a boutique purchase, to be placed on a shelf and admired by enthusiasts. But that belies the real issue here. Mega-fans will always be happy to plunk down a large wad of cash on a nicely packaged set, sure. But there’s no reason to thank that fan for her purchase, and then grab her by the ankles and shake her upside down for the rest of her lunch money when she asks about a digital copy.

While I agree with Kyle in principle, in this particular case I am pretty sure he is wrong. A friend on Twitter was less trusting than I, and he noticed that blu-ray.com lists this boxed set as having digital content (thanks, Victor!): 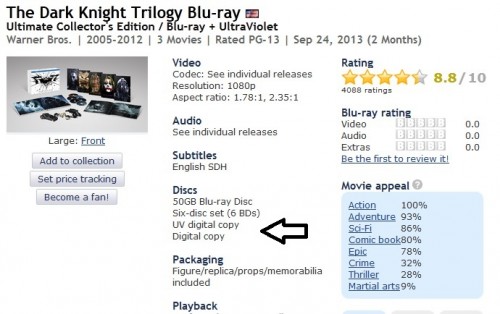 I am not completely sure that this listing is correct, but I would trust it more than the press release.

It’s a pity that the facts don’t support the complaint in this case. Kyle’s post was a good editorial on why people still tend to pirate the content. Even when we pay, we’re still expected to pay a second time for identical content.