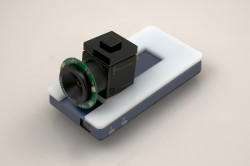 If you haven’t gotten enough of augmented reality in books after reading about the Bridging Book, textbooks, or Marvel’s garnishments on their comic books, then you might be interested in the latest project from Disney Research.

A research team located at a Disney facility in Pittsburgh and at Carnegie Mellon University has developed what is probably going to be the next great innovation in gaming controllers.

They have a prototype handheld device that combines a projector with an image sensor. The HideOut, as they are calling it, can use the image sensor to see what it is being pointed at and then respond by changing the image it is projecting:

Okay, this isn’t even close to being an ebook story, but when I first heard about it a few days ago I was intrigued. This concept solves many of the problems I have seen when someone’s tried to integrate augmented reality into books.

By placing the projector and the sensor in the same position HideOut avoids the awkwardness and technical problems that can be caused when AR projects depend upon a computer’s webcam (here, here, here).

And as you can see here, it can work quite well with a paper book:

Of course, the cost of all the extra hardware is probably going to remove any chance that this might show up as a book-related product, but this could still become a gaming controller. That future controller could build on the idea of the Sony Wonderbook, which launched last June,  and the Microsoft IllumiRoom.

That last project is basically the same idea as the HideOut, only scaled up to include an entire room (clearly Microsoft and this Disney/CMU research team have been working in the same direction) while the Sony Wonderbook was a much simpler game for the PS3 that let players cast spells from Harry Potter and see the effects on screen.

I don’t know when we’ll see HideOut integrated into a gaming controller, but I do expect it to happen. If it is produced on the same scale as the XBox or the new PlayStation then the cost will drop significantly. It would also be fun to play with, don’t you think?