When Digg launched their Google Reader alternative a few weeks back it quickly became clear that the service didn’t live up to the early hype.  The service was buggy, slow, and missing certain key features, leading me to wonder exactly what Betaworks was really showing off at the demos.

But the many issues with Digg Reader appear to have goaded the developers into improving the service. Digg announced last night that Digg Reader now had a couple of the most requested features. This service still isn’t worth using, but at least it’s not as completely worthless as when it launched.

According to the Digg blog, Digg Reader now lets users hid already read posts. We now also have the option of showing unread post counts for the feeds and folders we follow. It now looks like this: 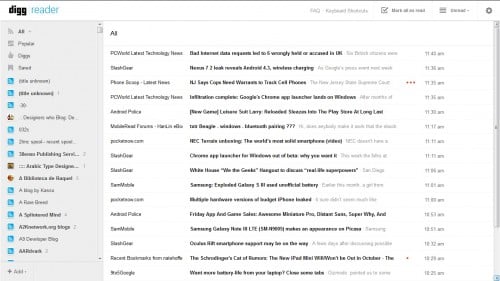 It’s good to see that Digg Reader has more features, but I spent a few minutes using it today and the service is still too slow. Also, the new option for showing only unread content is not yet available for the folders and feeds in the left panel, meaning that I still see an unmanageable mess of feeds and folders.

I’m sure Digg is going to pick up some users, but IMO it is quickly becoming one of the failed alternatives. It’s just not very good when compared to the more polished services like Feedly, BazQux (my preferred GR alternative), or many others.

Do you know the most interesting thing I’ve noticed about the Readerpocalypse? It’s not the huge number of GR alternatives that launched after Google broke our hearts back in March, but that most of the really good alternatives were already in place before the news broke that GR was going to shut down.

Yes, the current best GR alternatives had launched into a market dominated by GR. Some, like BazQux, were even profitable (or so the developer said on Twitter). I’m pointing this out because it goes against the common assumption that the free and immensely capable Google Reader had killed off innovation and competition in the news reader niche. As you can see from Feedly, BazQux, and other service that was clearly an oversimplification of the situation.