When Google announced the Readerpocalypse in March users fled in every direction, finding new homes at competing service like Feedly, BazQux, TinyTinyRSS, NewsBlur, NetNewsWire. Most of these services were thrilled to gain new users, but not all were able to survive the strain.

The developers behind The Old Reader announced today that they are closing its doors 2 weeks from today. They’re not shutting down, thank goodness, but they are going to downsize their userbase to a more manageable level.

The Old Reader, which has been widely heralded as one of the better Google Reader alternatives, had 10 thousand users the day before the Readerpocalypse. Within a week that number swelled to over 130 thousand, and it never stopped growing. 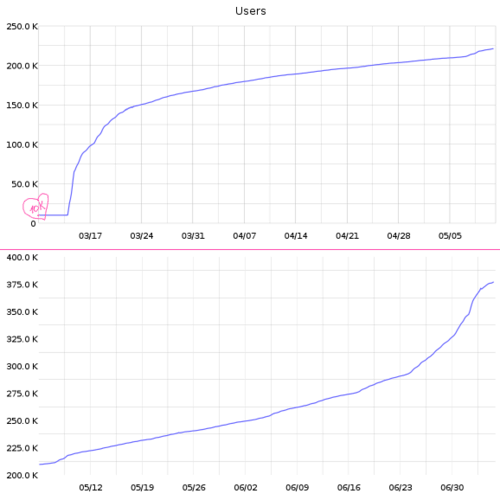 The Old Reader now stands at 420 thousand users. That figure might not be impressive compared to Feedly’s millions but it is more than The Old Reader’s developers can handle.

They explained in a blog post today that they launched this service as a labor of love, not as a job or a business, and that the post-Readerpocalypse growth has consumed their lives:

Since we launched first public version almost a year ago up until March 2013 we have been working on The Old Reader in “normal” mode. In March things became “nightmare”, but we kept working hard and got things done. First, we were out of evenings, then out of weekends and holidays, and then The Old Reader was the only thing left besides our jobs. Last week difficulty level was changed to “hell” in every possible aspect we could imagine, we have been sleep deprived for 10 days and this impacts us way too much. We have to look back.

The truth is, during last 5 months we have had no work life balance at all. The “life” variable was out of equation: you can limit hours, make up rules on time management, but this isn’t going to work if you’re running a project for hundreds of thousands of people. Let me tell you why: it tears us to bits if something is not working right, and we are doing everything we can to fix that. We can’t ignore an error message, a broken RAID array, or unanswered email. I personally spent my own first wedding anniversary fixing the migration last Sunday. Talk about “laid back” attitude now. And I won’t even start describing enormous sentimental attachment to The Old Reader that we have.

We would really like to switch the difficulty level back to “normal”. Not to be dreaded of a vacation. Do something else besides The Old Reader. Stop neglecting ourselves. Think of other projects. Get less distant from families and loved ones. The last part it’s the worst: when you are with your family, you can’t fall out of dialogues, nodding, smiling and responding something irrelevant while thinking of refactoring the backend, checking Graphite dashboard, glancing onto a Skype chat and replying on Twitter. You really need to be there, you need to be completely involved. We want to have this experience again.

The service won’t be shutting down, per se, but I don’t think most users will be able to tell the difference.

The developers are also open to the possibility of selling The Old Reader or possibly making the code base open source, but no definitive plans have been set.

In a way, I am not surprised at today’s news. I had frequently heard that The Old Reader was a great alternative to Google Reader, but I have never used the service myself. I tried to sign up a few times since March but The Old Reader always lo0oked to be straining under the load.

If you are one of the several hundred thousand users left out in the cold, there are alternatives. Over the past few months I have looked at a couple dozen different services, including 9 alternatives I identified the first day and a few dozen others I have tried and reviewed (here, here).