There’s been no formal announcement yet but Feedly quietly unveiled their long-promised premium service today. Feedly Pro is a $5 a month service that offers features which the more intense news junkies will appreciate, including priority for tech support, better security, and search.

This service isn’t going to launch into wide circulation until this Fall, but Feedly is currently letting the more eager/desperate sign up now with a lifetime subscription of $99. That offer is limited to only the first 5 thousand users, and given that Feedly’s userbase now numbers in the millions I would expect it to disappear quickly. 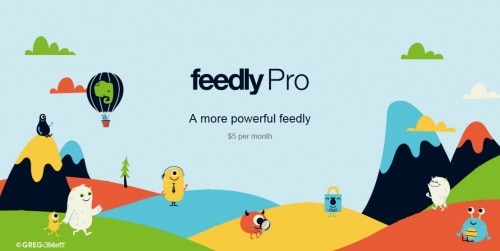 Feedly has hinted at this Pro service a couple times since Google announced the end of Google Reader in March. The company says they will offer a number of features in Feedly Pro which can’t be found in the free service. They plan to add more features in the future and they are going tolet users vote on the features. Right now Feedly Pro has more than enough to tempt me to sign up:

That last feature is the most important, IMO. It’s the one thing I am missing the most now that Google Reader is gone, and based on its absence from most of the services I have tried I would say it is probably also the most difficult to implement.

And in case you were wondering, Feedly isn’t going to give up on the free service:

Are you continuing to invest in the free version of feedly?
Definitely! We will continue to iterate and add new features to the free feedly. If anything, feedly pro makes us more sustainable and enables us to innovate faster.

Feedly is widely regarded as the most successful Google Reader replacement, but that title doesn’t come without issues. The service has had a number of hiccoughs in the past few months, including a Google Reader caused issue that happened shortly after 1 July as well as general growing pains.

Speaking of growing pains, this weekend The Old Reader survived a major turning point. Last week the developers had announced plans to downsize the free service in order to return it to a more manageable workload, but on Saturday a new post on The Old Reader’s blog indicated that TOR was under new management with new support and a bigger development team. The Old Reader only  has around 400 thousand users (up from 10 thousand on the day before the Readerpocalypse), but now that it has more behind the scenes support there is a chance that it might grow to rival Feedly in popularity.