Every time I think there’s nothing new in ereaders something comes along to surprise me. The Dutch gadget maker Gembird is reportedly going to unveil their second 9.7″ ereader next week at the IFA-Berlin trade show.

The EnerGenie PP2 takes a hardware design that some readers will recognize, adds Android, and tries to convince everyone that a price between 399 and 499 euros isn’t completely nuts. It doesn’t succeed. 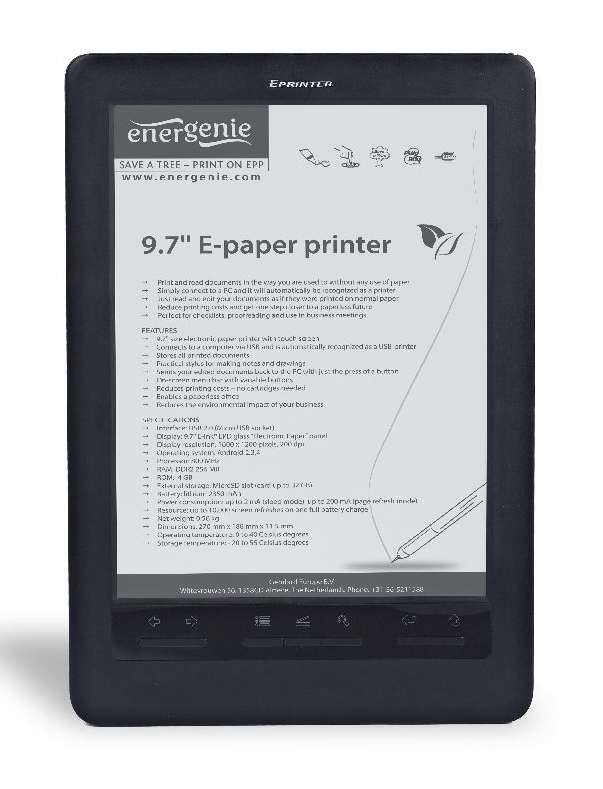 As soon as I laid eyes on this device I recognized the hardware. This is the same hardware design as the Ectaco Jetbook Color, only without the color E-ink screen. That means that the EnerGenie PP2 is probably based on the Hanvon E920, and not the Hanvon C920.

Gembird is trying to position the EnerGenie PP2 as an “e-paper printer”. You plug in the ereader to your PC via USB and it is automatically recognized as a USB printer. You can then “print” a document to the ereader rather than printing it on paper.

Basically Gembird is going to try to convince everyone that buying this expensive ereader is a better option than printing out paper. That’s pretty much the same marketing spiel as their first ereader, which showed up at CES 2012. That Energenie model had a docking station which looked cool, but so far as I can tell was never actually released (I cannot find it).

When I covered that earlier model in 2012 I pointed out that sending your documents to a tablet (like many of us already do) is a more cost-effective option given that you can use a tablet for more than just an ereader:

Gembird  has a great idea here, but do they really have to throw a €500 ereader into the deal? I think there would be a much better value to find a similar ability that utilizes the iPad or other existing tablets and ereaders.

In fact, there already is an option. Goodreader lets you edit PDFs on the iPad, and you can even email or print the PDF after you’ve edited it.  I’m not sure on the best way to get them to the app (email seems like a good bet), but this is still a better value.

But on the plus side, the Energenie will also let you send documents back to your PC:

BTW, while this ereader runs Android I  do not know yet whether you will be able to access the Android OS. It’s not uncommon for users to be blocked from accessing the OS on Android-based and other ereaders. But I also expect that one hacker or another will find away to unlock the OS, though given the price I’m not sure how many hardware hackers will want to buy such a limited device.

I’m not sure why anyone would want to buy it. A tablet would offer a better return, and if you are enamored of the idea of printing to your ereader then don’t forget that Amazon offers a similar ability for the Kindle platform. Even better, it doesn’t even require that you own a Kindle.