I have some bad news today for ebook lovers in Japan. The Tokyo District Court has handed down a ruling that says that a couple paid book scanning services (like 1DollarScan here in the US) violated Japanese copyright law.

Presiding Judge Shigeru Osuga has ordered 2 companies to pay a total of $14,000 in fines and stop scanning books. The companies, Sundream Co. and Doraibareggi Japan, have vowed to appeal the ruling and maintain that their actions were legal under Japanese law.

Today’s decision is yet one more step in a year’s long court battle. This lawsuit was filed by seven writers, including Jiro Asada, Keigo Higashino, and Kenshi Hirokane, but it is just one of a number of lawsuits that have been filed since 2011.

Seven major publishing companies and 122 writers publicly demanded in Spetember 2011 that a whole host of book scanning companies, more than 100 in total, stop scanning books. This service is known in Japan as jisui, which loosely translates as “cooking for oneself”, and it was rapidly growing to be a popular option for readers who wanted ebooks which weren’t available in the Japanese ebook market.

The companies typically charge a few hundred yen for each book and use commercial equipment similar to the one pictured below. 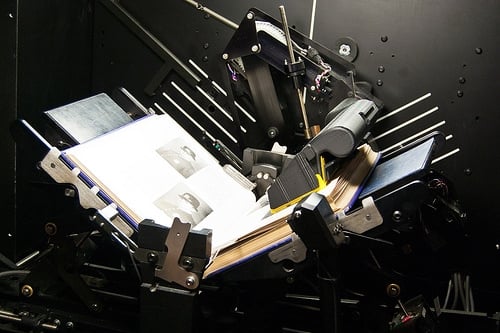 There are 4 other similar lawsuits going on at the moment in the Tokyo courts, and this ruling does not bode well for the jisui companies involved.

I have to say that I am puzzled by this decision. I had thought that the arguments made by the jisui companies made a lot of sense. They said they were working under the direction of their customers, and since the owner of a book has a legal right in Japan to scan that book the jisui service was covered under that right.

Unfortunately, the judge disagreed, saying in part that: “It is difficult for general readers to set up the equipment necessary to digitize their books. We do not view the situation as one in which the operators were carrying out reproduction under the management of their customers.”

I’m not sure that I see what  the technical challenges of a scanning a book has to do with a book owner exercising their right to scan a book. It’s like saying that you can’t work on someone’s car because the average person lacks the experience and technical skills of a mechanic.

I would also dispute the idea that book scanning is beyond the abilities of the average reader. It is probably more work than they are interested in performing but that doesn’t mean they cannot do it.