Tolino, a consortium of Deutche Telekom and 4 German booksellers and media retailers (Thalia, WeltBild, Hugendubel, and Bertelsmann), are at the Frankfurt Book Fair this week and they have a couple new tablets to show off.

Neither device could be accused of being cutting edge, but they are running the latest version of Android 4.2.2 on a 1.6GHz quad-core processor with 16GB of Flash storage, GPS, Wifi, Bluetooth, a microSD card slot, and full access to Google apps (of course).

First up is the Tolino Tab 7″. 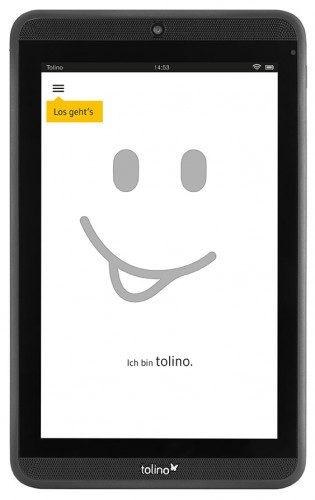 As you can probably see in the images above and at right, the Tab 7″ bears a passing resemblance to the Tegra Note from Nvidia.

Update: A reader has tipped me to the fact that Heise reports that these tablets are running on a Rockchip CPU. That means this can’t be a Tegra Note clone.

This tablet has a 7″ screen with a screen resolution of 1,440 x 900. It also has 1GB of RAM, front-facing speakers, a microSD card slot, and a 2MP front-facing camera. It weighs in at 335 grams, and battery life is expected to be around 12 hours. It’s scheduled to ship in mid-November with a retail of 179 euros, and is currently listed for pre-order at Thalia.de and Weltbild.de.

That price tag puts the Tab 7″ at 40 euros more than the Kindle Fire HD (in Germany), and it could be worth the difference. The Tab 7″ out-points the KFHD because it has more processor cores, a better camera, nicer speakers (they’re on the front), a card slot, and is not as locked down as the KFHD.

On a related note, the new Kindle Fire HDX hasn’t been listed yet on Amazon.de so I don’t know how much that tablet will cost, but I expect it to cost about 30 or 40 euros more than the Tolino Tab 7″. If my guess is correct then the Tab 7″ will still offer a decent value in comparison.

And if it doesn’t you can always look at the Tolino Tab 8.9″.

This tablet is clearly intended as a competitor to Amazon’s 8.9″ tablet, only at a lower price. It has the front-facing speakers and 2MP camera found on its smaller sibling, as well as a 5MP rear camera, HDMI port, and 2GB RAM. Screen resolution on this baby is 1,920 x 1,200, or what the KFHD 8.9 had last year.

The Tolino Tab 8.9″ weighs in at 537 grams, and like the Tab 7″ battery life for the Tab 8.9″ is expected to be around 12 hours. It too is scheduled to ship in mid-November with a retail of 249 euros, and it is currently listed for pre-order at Thalia.de and Weltbild.de.

And like it’s younger brethren, the Tab 8.9″ has the price and specs to compete against last year’s Kindle Fire HD tablets. But how will it fair against this year’s tablet? We’ll have to wait and see.

We’ll also have to wait a bit to see a hands-on video of the larger Tolino tablet, but thanks to lesen.net I do have this to share with you.

In other news, Tolino also announced today that they’ve updated the Tolino Shine ereader. This device was launched in March of this year, and today it got a little better.

Tolino hasn’t released a new model, but they have released a new firmware update and revamped the existing Shine ereader with E-ink’s latest Regal waveform screen refresh tech. This is the same tech as in the new Sony Reader T3 and in the Kobo Aura.

Several press reports say that the new Tolino Shine isn’t expected to be released until next March.