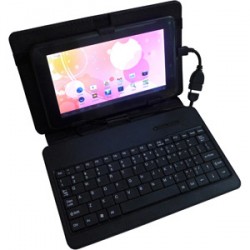 Power is one of those generic gadget makers that exists just long enough to release a handful of gadgets before vanishing into the night. And while most similar companies release only crap in their brief existence, Double Power somehow managed to beat the odds and put out a halfway decent tablet.

This is a tablet that I never expected to see. The D7015K isn’t a great tablet, and it’s not even a good tablet. But it is far better than you might expect for $70.

This review includes my opinion of the tablet, photos, and a hands on video from another tablet owner. I included it to give you a second opinion.

This tablet is slow and underpowered when compared to more expensive tablets and it got poor benchmarks on the Antutu test, but it was stable and worked well out of the box. This is one of the rare ultra-budget tablets that ships with Google Play, which is a plus. And it comes with a decent quality keyboard case that actually works out of the box. While it will not offer the performance of a tablet that cost $20 more it is also significantly better than what I would have expected to see in a $70 tablet. 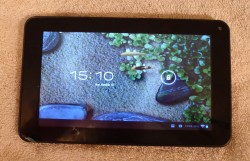 The D7015K is your generic Android tablet. It has a 7″ screen with a resolution of 800 x 480. There is a speaker on the back, and all of the card slots, ports, and power/volume buttons are on the right edge. The webcam is in the upper right corner of the front face. The front is a glossy black, and the back is flat with beveled edges.

In the box you’ll find a tablet, the keyboard case, power supply, and a couple USB cables (so you can plug in accessories).

This is a cheap tablet so it has a cheap and low resolution (800 x 480) screen, but that is about the worst you can say about it. The construction quality is good, and the color quality is reasonably good given its price.

The screen has about a 50 degree wide viewing angle. If you turn the tablet too far the color quality drops off somewhat, but you can still see what’s on the screen. In fact I would say that (aside from the resolution) this is actually about the same quality as the screen that’s on my Lenovo laptop (I’m not kidding).

The camera resolution was actually higher than what is reported on the box and in the product list. It’s a 1.3MP camera with 4 times the resolution as a VGA camera, but that doesn’t really matter. I didn’t find any photos worth sharing on this camera – not at either resolution. Once again, I’m not sure what I see the point of including such a poor quality camera sensor in a cheap tablet;

The video quality was passable on Youtube and the MP4 file I tried, but the biggest problem with this as a video player is the low resolution screen. While this tablet was able to play HD resolution videos and  Youtube videos full screen, it could not show them at the higher resolution.

The sound quality from the speaker on the back was above average. To be more exact, I use this video as an audio test and the test words came through clearly. That is unusual. In fact, I have owned laptops that didn’t pass this test. 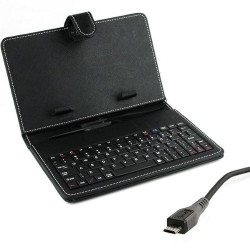 I’ve seen cases like this one floating around for a couple years now but I’ve never encountered a tablet that shipped with it. It is a cheap black vinyl and cardboard case designed to hold most 7″ tablets, but doesn’t really fit any single model perfectly.

If you’re interested, here is a similar case on Amazon. Mine does not have the stylus, though.

On one half of the inside of the case is a compact 78-key keyboard with a microUSB plug. This is not an Android optimized keyboard; it includes function keys, number/scroll/caps lock buttons, and there is a numberpad in blue.

On the other half you’ll find 3 metal clips that pin the tablet in place. The clips are coated in the same vinyl material which is used in the case, so I wouldn’t worry too much about the clips scratching up your tablet. The clips didn’t quite fit my tablet, but I was able to bend them enough that they held it firmly.

There’s a kickstand on the back of the case which you can use to set the tablet at a good viewing angle.

Considering its price, this case worked rather well.  It’s too small for a touch-typist, but I was able to adapt my 3-fingered typing method without too much difficulty. I also noticed that the arrow keys worked to help navigate menus in apps like Gmail. And I can also report that the KB was well-integrated with the tablet. When the KB was plugged in it kept the onscreen KB from appearing whenever you selected a search bar or some other text-entry area.

All in all, this case turned a $70 tablet into a not-quite netbook. It’s a pity that it’s not attached to a better tablet; there’s real potential here.

This is a 7″ tablet so it is possible to hold it in one hand while reading, but one-handed operation isn’t possible. I can grip this tablet with one hand, but I need the second hand to turn the page. It lacks the volume buttons that a lot of 7″ tablets have on the upper edge, so I can’t use them to turn the page.

I feel that the best reading experience came when I used the case to propped up the tablet. This was a landscape view, so you might feel the screen was too wide, but I liked being able to let the tablet sit on the table next to me while I used the arrow keys on the KB to turn the page.

I also briefly tried folding the case backwards and using the keyboard that way, but it felt too heavy and awkward.

The D7015K is basically what you’d expect in the performance department for a $70 tablet. It’s not the fastest device on the planet, but it is better than other tablets in its price range. It scored 4903 on the AnTutu benchmark test, and when I tested it a second time it scored 4601. That is rather slow compared to name brand and more expensive tablets, but it is also about what I expected.

And in spite of the low score this tablet felt better in my hands than expected. The software was stable, and while the touchscreen required a firm touch it was also consistent in how quickly it responded.

This tablet ships with Google Play as well as a basic suite of apps including Gmail and other Google apps, the free version of OfficeSuite 7, media player apps, a voice recorder, and the generic Android apps (email, calendar, etc).

I haven’t tried to install anything truly graphics intensive, but I also haven’t had any trouble installing the usual apps like Kindle, Adobe Reader, and Angry Birds.

I was able to install Angry Birds and play it without too much difficulty. It was rather slow, though, and the sound kept dropping out. The animation was also jerky and jumpy.

Here’s a decent hands on video I found online. This doesn’t show the exact model I have, but so far as I can tell the only difference is that I have a keyboard.