The Pew Research Center has issued a new report today on tablet and ereader adoption in the US, and the details should come as no surprise. 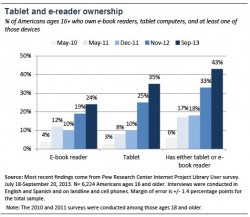 Pew is framing this report as showing a 10 percentage point increase in tablet ownership since last November, but that’s not the whole picture. I choose to include the intermediate figures because it shows us that most of the increase occurred as a result of the Christmas shopping season, and that gives us a better view of what’s actually going on.

Other highlights from the report include:

You can find more details here.

If you read the report then I would like to draw your attention to smartphones. That gadget is seeing a much higher penetration of the US market than tablets or ereaders but it’s not getting the same hype.

This report is based on a survey conducted in September 2013 as part of the Project Library User Report. A total of 6,224 Americans were polled.