released cheap 7″ and 8″ Android tablets in the past 5 months, E-Fun is no stranger to the sub-$100 tablet market and today they launched a new model.

The Nextbook Premium 7HD is not terribly different from the other tablets in this price range, but it does represent an upgrade to the 7″ tablet that E-Fun released back in June. This tablet runs on a slightly newer version of Android, has a higher resolution screen than its predecessor, and retails for $10 more.

This tablet also keeps the dual-core 1.5GHz processor and 1GB RAM found on the Nextbook 7SE, and it has 8GB of storage, a microSD card slot, HDMI out, Wifi, and a g-sensor. 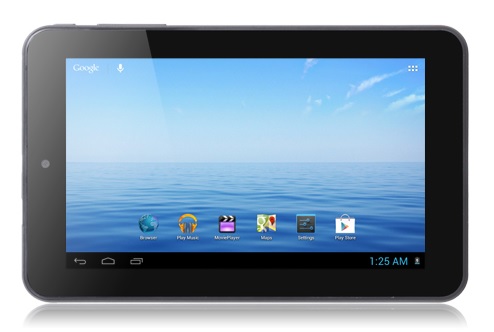 This tablet is also equipped with the usual disappointing VGA resolution webcam as well as a 2MP rearcam. Screen resolution is an acceptable 1024 x 600 – just like you would find on other tablets in this price range. There’s no mention of battery life or weight, but this tablet does have the usual dimensions of a 7″ Android tablet.

In terms of apps, this tablet will ship with Google Play as well as a suite of Google apps including Chrome, Gmail, and others. When you power on the tablet for the first time you will also find a reading app from B&N. Yes, E-Fun has continued to partner with an ebookstore in a financially tenuous condition. In a way, that should come as no surprise. Before E-Fun partnered with B&N they preloaded the Borders/Kobo app on their tablets, and we all know how that turned out.