When I first got my

hands on the Kindle Fire DX last month I was disappointed in the device and didn’t see a reason to upgrade from my Kindle Fire HD.

Perhaps I should have waited before making that pronouncement, because Amazon rolled out an update today that almost made me change my mind.

Fire OS 3.1 is a new update for the 2013 Kindle Fire HD and the Kindle Fire HDX. In addition to bug fixes, tweaks, and reported battery life improvements, this update adds the deep Goodreads integration which was mentioned at launch. Readers will be able to clip and share favorite quotes from inside the book, receive Goodreads updates, rate and review a book, and import their Amazon book shopping history into Goodreads.

This update also adds Second Screen, a new feature which lets owners pair their tablet with select Samsung TVs and the Playstation 3 (support for the PS4 is in the works). Second Screen enables Fire HDX owners to use their tablet for a playback controller, customized display for X-Ray, or simply a place to email, browse the web, and more while they watch a movie on the television. 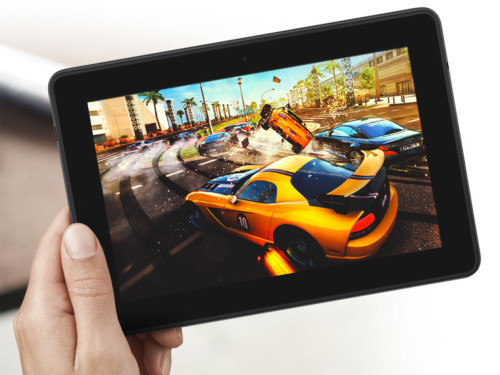 Amazon is also boasting that Fire OS 3.1 has a new ability to connect to secure enterprise wifi networks and access corporate apps, documents and resources like SharePoint, and VPNs. Hopefully this means the Kindle Fire HDX might start living up to the productivity claims made in the original press release for Fire OS.

The Kindle Fire HDX launched just under 2 months ago. The smaller model has a 7″ screen with an impressive 1920 x 1200 resolution display, while the Fire HDX has an 8.9″ with an impressive 2560 x 1600 resolution display. Both models run Amazon’s own Mojito OS on a 2.2GHz quad-core Qualcomm Snapdragon 800 processor with 2GB of RAM, Wifi, Bluetooth,and at least 16GB of storage.

The Fire HDX comes with a single webcam, while the Fire HDX 8.9 comes with both a rearcam and a webcam. They ship with either 16GB, 32GB, or 64GB of Flash storage, and you can also get a more expensive model with optional 4G LTE from AT&T or Verizon. And since this is a Kindle you can get it with or without ads. The lowest price offered is $229 for the ad-supported 7″ model with Wifi and 16GB of storage.