launching a new version of their re-publishing platform today. The biggest change? They finally offer support for Android smartphones – more than 2 years after they launched.

Convinced that websites needed a unique and proprietary solution for monetizing content on the iPad, Onswipe launched in 2011 with a “tablet publishing solution” that only worked with a single tablet. In the 2 years since Onswipe has added supported for a couple Android tablet (Kindle Fire and Nexus 7), the iPhone, and today they added support for Android smartphones.

On the iPad, Onswipe’s platform can take a website’s content and turn it into something like this: 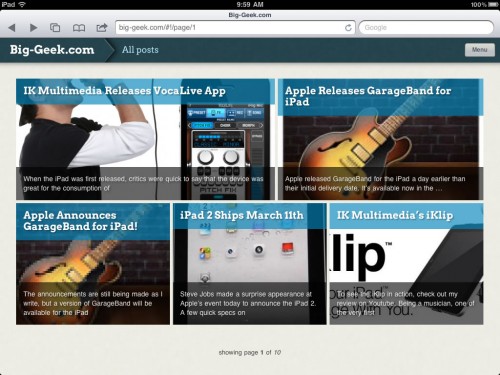 It will of course look a lot different on other platforms.

Techcrunch reports that in addition to the new smartphone support, the Onswipe platform has been rebuilt so that sites load faster and so website owners can customize the layout on the fly:

Onswipe sites are now more customizable, because publishers can assemble them using different modules, and if there’s big, breaking news, publishers can add a module to feature that news immediately. (Baptiste seems to be fixated on Toronto Mayor Rob Ford this week — and to be fair, who isn’t? — so he suggested that TechCrunch could create a special Rob Ford widget).

Onswipe now supports 27 million device users (across all their website partners), which is a rather small number considering that there are over 500 million iDevices in the world.

I’ve never liked Onswipe, and I’m sure you figured that out from the tone of the above post.

When they launched in 2011, Onswipe was clunky and IMO unnecessary; it served a single device, the iPad, which didn’t need any help with displaying website content. At the time the iPad was more than capable of handling regular websites, so there was no need to use a proprietary solution.

And in the 2 years since I have seen Onswipe go from being unnecessary to being the purveyor of a redundant technology; thanks to modern web design there is literally no need to offer a custom website for certain screen sizes.

Have you ever heard of responsive web design?

This term was coined in 2011 to describe websites that are built with a single layout, theme, or design that will adapt to function on all screen devices. And just to be clear, I am including Windows smartphones/tablets/laptops/PCs, all Android tablets/smartphones, and pretty much everything with a screen; not just the handful of mobile devices supported by Onswipe.

If you’re not sure what I mean then let me show you by example. Go to Techcrunch, and once the page has fully loaded make the browser window narrower. And then make it even narrower – the width of a smartphone, say.

What you are seeing on the Techcrunch website is an example of responsive web design. That is how websites are supposed to be built in 2013, and it renders Onswipe’s platform redundant.

And as Onswipe’s 27 million users show, most websites are already adopting that better solution.