News about ereaders in eastern Europe rarely crosses my desk, so I was pleased today when I read about the Evobook 3.

The Romanian gadget maker Televoice Group has long been selling tablets, smartphones, and GPS in Romania under their Evolio brand and this week they launched an ebook reader.

The Evobook 3 is a budget ereader with a 6″ Pearl E-ink screen (resolution 600 x 800). It’s running Linux on a 380MHz Allwinner E200 CPU with 64MB of RAM (same as on the InkCase E-ink smartphone case).  In terms of storage the Evobook 3 has 4GB of internal storage, and it also has a microSD card slot.

There’s no Wifi or touchscreen mentioned in the press release or the product page, but this ereader does have a g-sensor and a 1.5Ah battery. The battery life is projected to last 10,000 page turns before needing to be recharged. 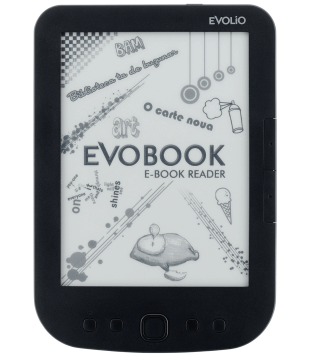 This is a budget ereader so of course there is no audio support, but the supported eBook formats include Epub, PDF, DJVU, CHM, Mobi, and FB2. The Evobook 3 can also support Doc, html, RTF, Docx, and txt files.

The Evobook 3 is going to ship with 100 preinstalled books, from various fields, in Romanian and English. It will also have a 20 lei (~ $6 USD, or 4.49 euros) voucher which can be redeemed at Evobook.ro, Televoice Group’s content store.

Retail has been set at 89 euros, but as part of a launch promotion the Evobook 3 will be available for 55 euros. It is available today.

This is at least the second Evobook ereader; I found press reports of an Evobook 2 from 2011. I can’t find any sign of an earlier model, but it was probably launched in 2010 or 2011.