8″ ereader won’t be coming out this year.

While French ereader maker Bookeen had originally planned to release the Cybook Ocean before Christmas, they recently announced that this device is going to be delayed by a few months, giving it a new launch date in the first quarter of 2014.

I must say, this is a lot of attention that no one has actually seen yet. No, seriously, all that Bookeen has released are a few clearly photoshopped images like the one below. 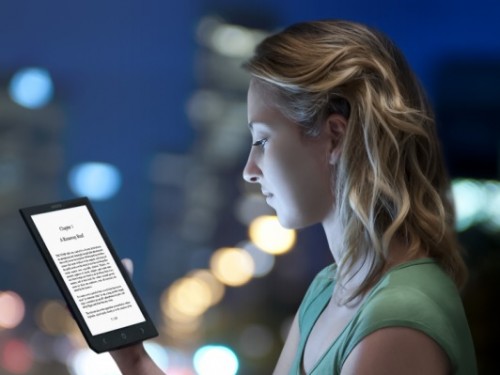 According to Bookeen’s past announcements, the Cybook Ocean has an 8″ screen with a resolution of 1024 x 768 (close to the same as on the latest 6″ screens). It comes with Wifi, a touchscreen, a frontlight, and 4GB Flash storage and a microSD slot.  Battery life is expected to be around 10 weeks, though it’s not clear whether that is with the frontlight on or off.

Of course, none of these details have been confirmed by any blogger, but this is what bookeen has stated on their blog.

The Cybook Ocean was supposed to have shipped by now, with a retail price of 160 euros.

Assuming that price has not changed, the Cybook Ocean will cost about 10 euros less than the Kobo Aura HD. With a 6.8″ screen, Aura HD has a smaller but much higher resolution screen. It is also unfortunately crippled by being tied to Kobo’s servers (registration and account setup required), so I am torn between recommending the sharper screen and decrying the virtual chains.

The Cybook Ocean also costs about 20 euros more than competing 8″ ereaders like the Icarus8, most of which do not have a frontlight or touchscreen.