to grasp the idea that users might want to read ebooks that they didn’t buy in Play Books, Google started rolling out a new update for their ebook app this week.

Google Play Books update 3.1.17 adds a number of new features, including tweaks to the appearance of notes and highlights, performance, stability and accessibility enhancements (and the ebooks now open more smoothly), and the ability to upload your PDF and Epub ebooks to Google’s servers.

Google announced cloud storage for a user’s ebooks back in May 2013. They let users store up to 1,000 titles which can be downloaded to the Google Play Books apps for iPad, Android, and iPhone. With a size limit of 50MB, Google not only matched the Kindle Cloud storage feature that Amazon launched in late 2011 – they exceeded it.

But it wasn’t until today that Google would let users upload the files from the Android app. 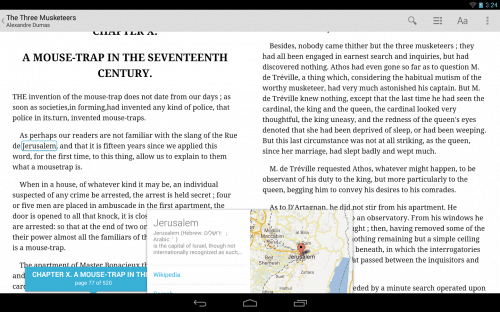 The update isn’t available to everyone just yet. Google is rolling it out slowly to a few users at a time and you should expect it to arrive some time in the next week or so. But if you don’t want to wait Android Police grabbed a copy and you can download it from them.

Update: But you might want to wait. Early user reports indicate that the process doesn’t work so well just yet.

As for me, I plan to continue to use Aldiko or Moon+ Reader. This whole “upload before you can download and read” nonsense is simply silly. Yes, cloud storage is a useful feature, but why can’t I simply load the ebooks locally? When you combine it with that deleted books fiasco in August it doesn’t convince that Google really knows what they are doing, and that’s why I intend to continue to avoid their reading app.