Frustrated by the perpetually-delayed PopSlate and can’t get your hands on the InkCase from Gajah? Then you might want to keep an eye on a new case maker I just discovered. 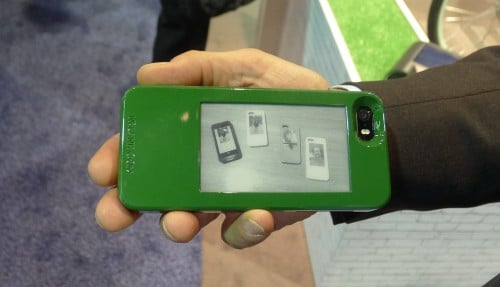 While I was in the E-ink booth on Tuesday I happened to run into Neil Blank. He’s the principal of nBlank, a product development consulting firm, and he showed me nBlank’s latest project. It’s called the Blank Slate, and like the PopSlate and the InkCase the Blank Slate adds a second E-ink screen to your iPhone.

The Blank Slate case sports a 3.5″ E-ink screen (640 x 360) and connects to the iPhone via the lightening connector. Unlike the InkCase, this isn’t intended to be a BT accessory but an integrated component. 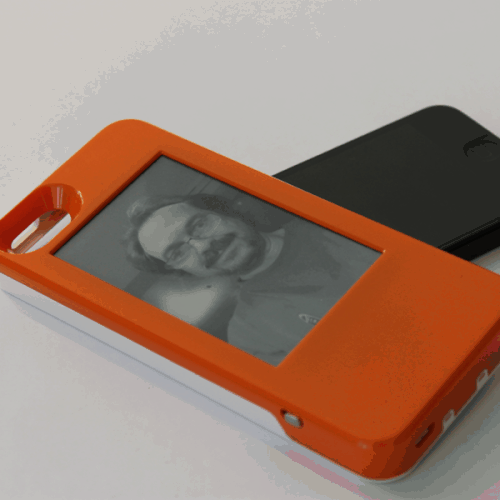 This case is still in the early development stages, and in fact the prototype I saw wasn’t even a pre-production model. It worked, yes, but from the way it was described this was a “everything fits in the case, and it works” model. nBlank has been working on the Blank Slate for about 6 months, so the fact that they have a working model is remarkable.

I don’t have any firm details on when it will hit the market, but I do know that it will go through at least one design iteration before going into production. Until then, all I have is this demo video that Neil posted on Youtube:

Update: Here’s a gallery of photos which show the Blankslate and the InkCase side by side. I wasn’t allowed to mess with the BlankSlate too much, but I did get permission to set them on a tablet and take photos.