Archos unveiled a trio of budget Android tablets with large screens today, but for the life of me I don’t see why they bothered.

The Neon line of tablets features 3 models with screen sizes ranging from 9″ to 10.1″, all of which run Android 4.2 on a quad-core 1.4GHz MediaTek CPU. The tablets all have 1GB RAM, 8GB Flash storage, and microSD card slots, and generally resemble the large budget tablets which have been released over the past 9 months. 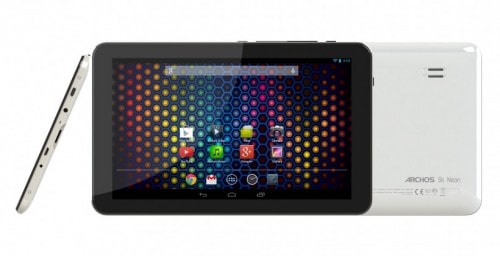 I don’t have prices or a release date yet, but the spec sheets are listed and I am not impressed. Archos has basically released tablets which are indistinguishable from ones that have been on the market for 6 months or more.

The Neon tablets have the same VGA webcams (I’m not joking), the same disappointing screen resolutions, and largely the same appearance as any large-screen Android tablet randomly grabbed from the electronics section of the Amazon website.

Quad-core CPUs might sound impressive but, as I have discovered when reviewing the Sero 7 Pro and Ematic’s first quad-core tablet, the supposedly more powerful CPU doesn’t actually translate into a more powerful tablet with better performance.

So what does Archos bring to the table? Well, I’m expecting that these tablets will be cheap, so there’s that.  And if the prices are as low as I expect battery life probably won’t be anything to speak of, but that’s not unique to Archos.

All in all, the new tablets from Archos confirm my suspicions from CES 2014: the coming year looks to be rather dull for the budget Android tablet market. We might see tablets with newer versions of Android, and we might see tablets with a better feature here or there, but I am not expecting to see any tablet that will make me wont to wait, and I’m not even sure we’ll see any decent values.

What with last year’s tablets going on sale, there’s a good chance that you might be able to pick up a tablet with the same performance and quality as the new models, only at a much lower price. If you find a budget tablet you like on sale, buy it. I don’t think you will be disappointed.

P.S. Unless Hisense surprises me, which is possible.