One of the great things about Android is that it is almost infinitely customizable. If you don’t like how something looks, you can search Google Play for a replacement.

Don’t like a widget? There’s a dozen alternatives. Don’t like the home screen on your tablet? There are a hundred alternatives to choose from!

In short, I was looking for a home screen which would put my ebook library front and center. I didn’t finds that home screen (not yet), but while I was exploring I found a few fun alternatives that I thought would be fun to share.

Sidenote: Scroll down to the end of the post for a few tips on how to install these apps and how to switch between them.

First up is the Espier Launcher. This is an iPhone inspired home screen app which looked pretty good on my tablet:

This launcher replaces the app drawer with the infinitely long chain of iOS home pages, and uses icons that look a lot like Apples. It offers quite a few customization options, including some that require a paid upgrade. It’s available in Google Play as Espier Launcher and Espier HD (for larger screens).

Next is the Best iPhone Launcher. Yes, this app is basically the same as Espier, but it looks different and it manages to replace the notification bar across the top of the screen with one that looks like it was copied from Apple (it doesn’t, however, replace the existing icons). Also, I preferred it over the Espier Launcher, which was a good enough reason to include it.

This home screen doesn’t work so well on a high resolution tablet, but it should work okay on a smaller screen. You can find it in Google Play.

This next home screen app makes your app icons look like they were drawn free hand on a piece of brown paper. It appears to have been designed for a smaller screen, so I wouldn’t try it on a tablet.

You can find this app in Google Play. It is actually a theme for Go Launcher, so you will need to install both.

If iOS isn’t your thing then how about Windows Phone? Launcher 8 offers a stomach-turning Metro-style replacement home screen that will convince the uninformed (me, for example) that we’re looking at a device running one of Microsoft’s OSes. 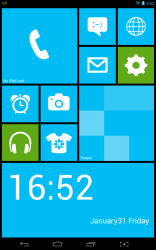 This is a terribly confusing home screen app which I assume is behaving just like you would expect a Windows Phone to behave (even the lock screen behaves differently). The tiles are customizable, and the home screen scrolls vertically to show more rows of tiles.

Y0u can find this app in Google Play. And if this launcher doesn’t suit you, check out Windows 8 launcher. That second launcher would have been my first choice (it looks nicer) but it’s not compatible with my Hisense Sero 7 Pro.

And if yu’re looking for a theme out of left field, try Atom Launcher. It’s a minimal;ist typographic theme which looks and acts like nothing I’ve seen before on an Android tablet. 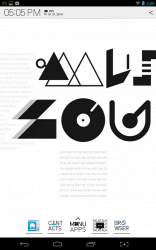 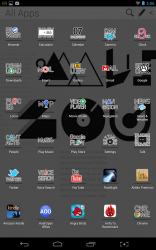 You can find the Atom Launcher in Google Play. If you want a suggestion, I would combine it with the Typo White theme. It replaces the more common icons with words (Chrome, music, browser, etc). It’s visually eye catching, though I’m not sure I would want to use it for long.

Of the 5 launchers mentioned above, i think I like the Espier the best. I’m not an Apple fanboi, but I like the number of customization options and the generally clean appearance.

Can you suggest one to add to this post? (Any launcher that will make my Android tablet look like it’s running a different OS would be great.)

P.S. Installing these alternate home screens is simple.  Just look for them in Google Play and click the install button. If you cannot find an app in Google Play on your device, chances are your device isn’t compatible.

P.P.S. Make a note of the home screens you install; you can remove them by going to the apps menu under the settings menu and then selecting the app and choosing the uninstall option.