had a chance to read Hugh Howey’s Author Earnings Report yet? The first edition was only released yesterday, so you might not have had a chance to read it yet. I strongly urge you to do so, because at first glance it appears to undercut much of the anti-indie rhetoric of late.

Whether it’s Chuck Wendig describing self-published titles as a shit volcano, Donald Maass relegating self-pub authors to steerage, or George Packer’s slanted anti-indie piece in The New Yorker, there seems to be an excess of rhetoric lately critical of the quality of ebooks produced by indie publishing.

This pattern was brought to my attention in a comment by Mackay Bell yesterday. I wasn’t quite sure what to think about all the criticism (I wasn’t sure if it were valid), but now that I have seen the Author Earnings Report I now believe that much of it is baseless.

This report is based on the best seller lists for the Kindle Store, as reported by Amazon on their website.  The set of data I am looking at this afternoon consists of 7 thousand (ish) titles from 3 genre best seller lists: mystery, SF/F, and romance. That’s an impressive sample size, and the report uses this mass of data to come up with some interesting inferences about author earnings, but I’m not interested in the money .

What caught my attention today was what the early sections of the report said about the number of indie vs traditionally published titles on the list as well as the relative quality, price, and reader satisfaction.

One common attack aimed at self-published ebooks is that the quality is much poorer than for traditionally published titles. But as this report will show you, readers don’t necessarily agree.

The first thing we learned is that ebooks from indie authors and small publishers tended to have a higher average rating and a lower average price than titles from the Big 5: 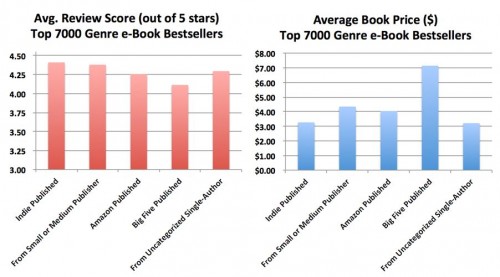 FYI: The last category, “uncategorized single-author publishers”, refers to imprints that only have a single author to their credit. I think, and I’m sure most will agree, that these are probably self-published authors who created their own imprint.

Chuck Wendig characterized self-pub ebooks as a shit volcano, but if you look at the above charts it would seem that readers are quite satisfied with the self-pub ebooks they’re buying – more so than with traditional titles. Perhaps the mass of poor quality ebooks he complained about aren’t bothering readers quite so much as they bother Wendig. At the very least, readers are clearly finding the good stuff.

And there’s a lot of good self-pub ebooks to find, as you can see from this next chart: 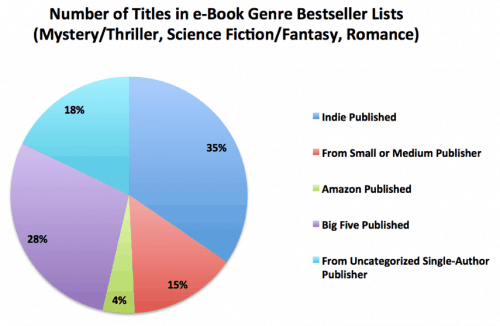 Isn’t it interesting how Donald Maass would relegate self-pub authors to steerage, but readers would give them greater prominence on the best seller lists than titles published by the Big 5?

I don’t know about you, but this makes me wonder whether all the recent criticism of self-published authors has any basis at all. I know that I never agreed with the criticism, but TBH part of my disagreement grew out of a dislike for the condescending (steerage) and insulting (shit volcano) words used to describe self-publishing.

But now that we have evidence to show that readers don’t agree with the rhetoric either, I think it’s safe to say that it’s baseless.