been avoiding Windows 8 because of the horrible Metro interface then I have some good news for you. Microsoft held a press conference today where they shared a few details about the next update for Windows 8 and Windows RT, and it looks like MS is finally bowing to market pressure.

Microsoft is in Barcelona this week for MWC, and they kicked off the week with a press conference where they share details about new updates for Windows and Windows Phone.

The new version of Windows is due out in the next few months, and Microsoft says that it will expand the options for hardware makers to tablets for the budget market, include compatibility for use in schools and large business, and improve the non-touch user interface controls. 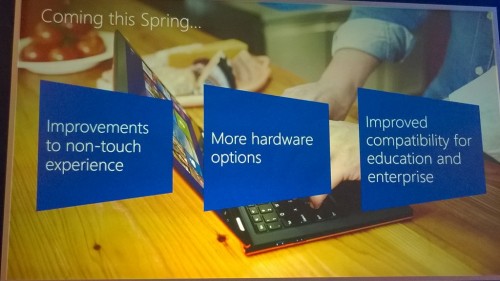 According to Joe Belfiore, VP of operating systems for Microsoft, the updates adds a new mouse user interface, giving users new ways to access Start and to close apps. It will also be easier to launch and switch between apps through the task bar, and Microsoft is also adding search, power, and settings icons on the Start screen. Those icons can currently be found on a menu accessed by swiping from the right of the screen, making them difficult to access if you have a mouse and not a touchscreen.

When Microsoft announced Windows 8 at CES 2011, many looked on with a sense of dismay as MS showed just how obsessed they were on pushing the touch-focused Metro interface.

Unfortunately for MS, the market doesn’t seem to have liked the idea nearly as much as MS. Today’s presentation also revealed that only 40% of Windows 8 devices are equipped with a touchscreen, meaning that MS developed an interface that won’t function properly on 60% of the devices it’s running on.

The Metro interface is so unpopular that dual-boot Android/Win7 devices made an appearance at CES 2014, close to 18 months after Windows 8 shipped. Metro is in fact so unpopular that in the past few months several laptop makers brought back Windows 7 as an alternative.

In other news today, Microsoft is also making moves to go after the budget end of the device market. A few days ago they lowered the license fee for Windows 8 and Windows RT, and today they lowered their minimum hardware requirements.

According to reports,Windows 8 devices that retail for less than $250 have had their license fee slashed by 70%. The new minimum requirement is 1GB of RAM and 16GB of storage. That’s not exactly a budget device when compared most of the bottom of the barrel Android tablets, but it is considerably cheaper than Microsoft’s previous standard.

Many are viewing these changes as a move against Chromebooks, which have made some headway in the educational market. That’s probably true, which might explain the new IE8 compatibility mode for Internet Explorer 11.