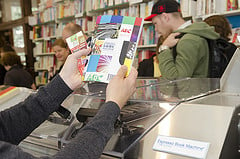 2013 Books-a-Million announced plans to install POD machines in their flagship store in Birmingham, AL and one of their highest grossing stores (Portland, ME) as part of a limited test to see whether print on demand can be integrated with the big-box bookstores operated by Books-a-Million.

It’s been some 3 months since they installed the Espresso Book Machines and they’re reporting that the move was a success, although BAM isn’t quite ready to expand the effort.

The Espresso Book Machines have proved very popular with self-published authors as well as with bibliophiles in search of public domain classics. Each location has 2 staff members who maintain the machines and print books, but most of their time is spent working with customers who wanted to print a copy of their own work.

According to Mary Gallagher, a senior VP in the BAM merchandising group, “What they do spend most of their time doing, besides printing physical books, is assisting people on the self-publishing front. It’s a lot of fun, talking to serious book lovers. It’s always great to hear from customers.”

Many of the projects involved family history and genealogy, but the employees who operate the machines have worked on everything from printing a fully researched family biography to helping kids bind a book of illustrations for their grandmother.

Books-a-Million hasn’t shared how many books have been produced in the 2 stores in the past few months, but Gallagher did say that only a limited number of licensed in-copyright titles were bought by customers. “We do wish we were doing more volume in copyright situations with books that are available through standard publishers.” She added “But they haven’t gotten on the bandwagon yet, and the lion’s share of the business is really from the self-publishing community.”

Initially conceived as a way for bookstores to stock and sell a large catalog of out of print titles from publishers, the Espresso Book Machine can print out a copy of paperback book in any number of standard sizes in only minutes. While it is capable of printing commercially published books, it has quickly proven more popular among self-published authors as well as writers who simply want to create a copy of their work for personal use.

This phenomenon has been noted by everyone from indie booksellers to the University of Alabama, and On Demand Books, the developer of the Espresso Book Machine, readily informs potential customers that 90% of business their first year will come from self-published writers –  and they’ve been sharing that info since at least 2012.

In a way, Espresso Book Machine has taken on the role of print shops rather than its intended role as a bulwark to the publishing industry. On Demand Books promotes the Espresso Book Machine on the basis of its catalog with millions of titles from Random House, Hachette, McGraw-Hill, Simon & Schuster, WW Norton, Macmillan, HarperCollins, O’Reilly Media, and other publishers, but in reality the single largest source of content is the customers who walk in the door.

Around 74 Espresso Book Machines have been installed since the first unit was unveiled at the New York Public Library in 2007. They can be found in libraries, bookstores, and universities around the globe, as well as in a drugstore in the Seattle, Washington area. This last is the result of a partnership between Kodak and On Demand Books, and it could lead to Espresso Book Machines showing up along side Kodak Photo booths in your local drugstore.