Display Inc, one of the world’s largest makers of displays for smartphones, announced on Monday that they are planning to raise $3.8 billion in an IPO.

With a stock price projected to be between 900 yen and 1,100 ($8.88 to $10.85), the firm is setting a lower price than analysts had previously expected, signaling a cautious investor stance amid rocky market conditions. JDI plans to issue 140 million shares in this IPO, and Sony is going to be selling another 240 million shares.

Along with Hitachi and Toshiba, Sony was one of the initial investors in JDI when it was formed in 2012 by combining the 3 firms’ struggling screen manufacturing units. And now that Sony is selling most of the shares in the IPO, it would seem that JDI is the next part of Sony to go up for sale.  The electronics maker recently sold their PC division as well as a couple office building, and just last week they put their old HQ in Tokyo on the market. 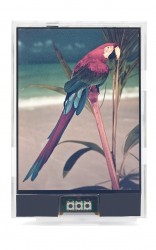 Their loss is someone else’s gain. JDI is one of the leading makers of smartphone and tablet screens, and they maker displays for the Apple iPhone 5c and 5s as well as other top US and Asian smartphone makers, including Huawei.

The firm has been making a name for itself over the past couple years with new screen tech, including 5.4″, 5″, and 12″ screen units as well as a low-power LCD screen which integrates static RAM into each pixel, thus reducing the need to constantly refresh the screen. JDI first unveiled a 7″ demo unit in 2012, and in January 2014 they debuted new screen units intended for the wearables market.

JDI plans to announce the final offer price on 10 March, and the company is scheduled to be listed on the Tokyo Stock Exchange on 19 March.