Chinese ereader maker Onyx might not have the largest share of the global ebook reader market but they do have some of the more industrious and ambitious designers.

I have just found (via MobileRead) a spec sheet for the Onyx Boox i86. This big and beautiful ereader has an 8″ screen with a resolution of 1600 x 1200. At 250ppi this screen isn’t quite as sharp as the 6.8″ screen on the Kobo Aura HD, but it comes close.

The Onyx Boox i86 runs Android 4.0 on a 1GHZ CPU with 512MB RAM, 4GB Flash storage, and a microSD card slot. It also has Wifi and Bluetooth. On top of the high resolution screen you’ll find a frontlight and an IR touchscreen from Neonode.

I can also confirm that this device has at least one speaker or a headphone jack; one of the listed features is text to speech (provided by Ivona).

In terms of software, the i86 is probably running the same reading app as on Onyx’s other Android-based ebook readers (with the same note-taking and scribbling abilities). The spec sheet lists the usual broad range of format support, including ebook formats like PDF, Epub, and FB2 in addition to document formats like Doc, CHM, html, and RTF. There’s also support for MP3 playback. 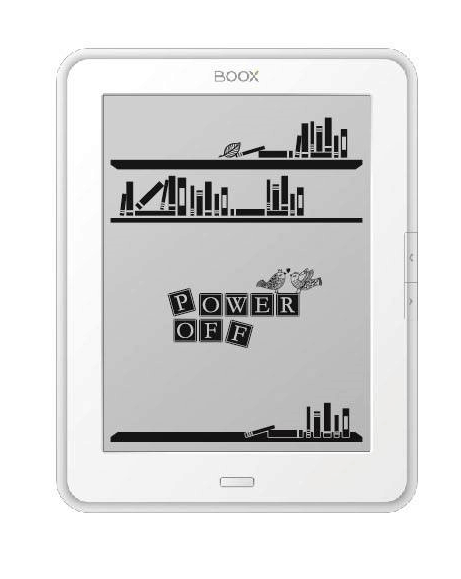 The spec sheet also lists the i86 as having a Pearl E-ink screen, and not the newer Carta screen, which makes sense. This is one of E-ink’s existing screen sizes, and it is actually on the market.

This 8″ screen unit is used in the Pocketbook Color Lux ebook reader.  That device has an 8″ color E-ink screen, and because it has a color E-ink screen the Lux also has a quarter the screen resolution (800 x 600).

E-ink creates a color screen by placing a color filter on top of a black and white E-ink screen. The filter changes each of the pixels in the underlying screen to either red, green, or blue, and it also leaves a 4th pixel as b/w. Because the color E-ink screen takes 4 pixels to display one color pixel (RGBW), it reduces the screen resolution by 75%.

Along with a grey tinge, the problem with screen resolution is one of the reasons I don’t like color E-ink screens. I’m glad to see someone using the 8″ screen sans color filter, and I hope to see it on the market.