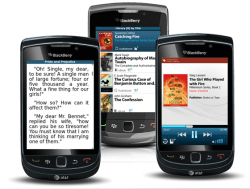 declining sales, Blackberry has long since stopped being one of the major tablet and smartphone makers, so today’s news should come as no surprise.

The library ebook vendor OverDrive sent out an email this morning  to their library partners, announcing that they were withdrawing the OverDrive Media Console app from the Blackberry App World.

It seems that the app, which ran on the BB Playbook as well as Blackberry smartphones, is only used by a fraction of a percent of library patrons and has been steadily losing users over the past few months. Rather than simply let the app wither on the vine, OverDrive is formally abandoning it.

Update: A reader has informed me that the Blackberry app is the same app as the Media Console Android app. Anyone who has a Blackberry device can simply sideload the existing Android app, which is available on the OverDrive website. I’m told that app runs well on the Blackberry, leading me to wonder why OverDrive didn’t simply update the app that was available in BB App World rather than remove it.

Here’s the text of the email:

Effective April 10, 2014, the OverDrive Media Console (OMC) mobile app for BlackBerry will no longer be available to download on BlackBerry, BlackBerry 10, and Playbook devices.

BlackBerry users with the app installed prior to April 10 will be able to continue downloading eBooks and audiobooks via OMC. However, no further development or testing will be dedicated to it.

In the past year, OMC for BlackBerry has experienced a steady decline in downloads. Only .3% of all visitors to digital library websites come from a BlackBerry device. After much consideration, OverDrive has decided to remove the app from BlackBerry App World and continue to focus our development efforts on more widely used platforms such as iOS and Android—both of which have more daily downloads than BlackBerry has monthly.

As of October 2013, OverDrive was the leading library ebook distributor in the world. With over 27,000 partner library and schools in 36 countries around the world, OverDrive is far larger than 3M Cloud Library, Ingram’s MyiLibrary, or Baker & Taylor’s Axis360.