you been waiting for the FCC paperwork to clear so you can get a look inside the Fire TV?

Your wait is over. The repair specialists at iFixit have posted a set of teardown photos of the Fire TV and both of its controllers, revealing 2 ordinary looking controllers and a single board computer.

Both the guts of the gaming controller and the remote control look pretty much like all of the other controllers I’ve broken open over the years,  and aside from a few new additions like a microphone and RFID tag there’s little to comment on.

But the Fire TV is a different matter. This set top box sports a massive heat sink which takes up most of the volume in the case. I don’t know that the Fire TV is going to get hot enough to cook, but it is clear that the hardware designers expect the single board computer inside to put out a lot of heat. 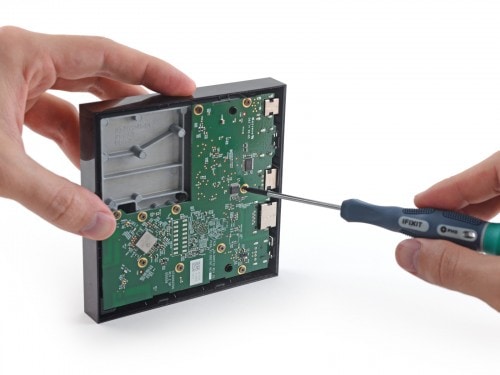 It also looks like they may be anticipating putting a Flash drive inside the Fire TV. Do you see the gray rectangle in the upper left corner which isn’t covered by the circuit board? That is plenty of space to fit an SSD.

While the Fire TV does ship with 8GB of storage, some people will want more storage and for them a 64GB or 128GB would make sense. Of course, i don’t see a connector on the circuit board for a drive, which suggests that anyone who wants the additional storage going to have to wait until the next model.

The Fire TV shipped on Wednesday running Android on a year old smartphone chip with 8GB of storage and a $99 price tag. Early reviews are mixed, leaving this blogger relieved that he didn’t rush out and buy one. 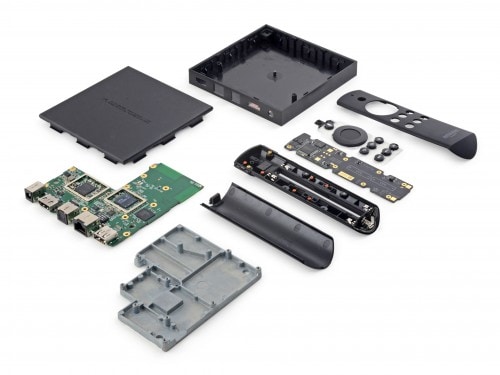