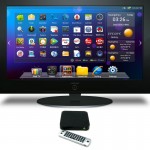 been days since Amazon unveiled their living room gadget, the Fire TV, and now new leaks suggest that Google is working on a similar product.

The Verge got their hands on documents concerning something called Android TV. Almost no hardware details are known about it, but it looks to me like Android TV is intended to do for TVs what Android Wear did for smartwatches:

Google’s new vision for Android TV is less ambitious and easier to understand. The company is calling for developers to build extremely simple TV apps for an extremely simple set-top-box interface. While Android still lives under the hood, the interface will consist of a set of scrolling “cards” that represent movies, shows, apps, and games sitting on a shelf. You use a remote control with a four-way directional pad to scroll left and right through different suggestions, or up and down through different categories of content, each with their own shelves. Much like on other set top boxes, each item will be like a miniature movie poster or book cover, and you’ll pick the one you want. The controller will also have Enter, Home, and Back buttons to help get around, and there will be “optional” game controllers.

Android TV will also support voice input and notifications — though Google is encouraging developers to only use notifications in very limited cases. In total, Android TV is remarkably similar to Amazon’s just-released, Android-based Fire TV.

Aside from the framework Google is providing to developers, there is very little here that hasn’t already shown up in existing smartTVs and set top boxes like the Fire TV, Roku 3, or the dozens of similar boxes and dongles developed by Chinese and other gadget makers.

But what sets Android TV apart is that it looks to me like Android TV isn’t a device so much as it is a platform for device makers and app developers to build on. If I am right them this could spur the development of not just one set top box running Android but a whole host of competing devices.

Google had previously shown interest in this market when they debuted the failed Google TV concept in 2012, but now it feels like Google TV is going to have the same status as Google Glass. The latter device has been sidelined ever since Android Wear launched last month as the newer platform picked up more press and more attention from developers, and I would expect Google TV to suffer the same fate.

It looks like Google already deprecated the Google TV brand last Fall, and at CES 2014 a couple of existing Google TV hardware partners showed off new devices, including both SmartTVs and set top boxes, which ran Android instead of Google TV.

There’s no word yet on when Android TV will launch but I would expect to see this soon.