the news reader apps which depended on Google Reader managed to adapt and survive within weeks of the Readerpocalypse last Jule, and Reeder was no exception.

This popular app for OSX and iOS gained its independence from Google Reader last April, and it’s back on my desk again today with the news of a major new release. Reeder 2, the new and much improved app, is now available for OSX. This is strictly a beta release, so caveat emptor.

The new version of Reeder was released for the iPad and iPhone late last year, but it only arrived on OSX today. The app has new features and a new look: 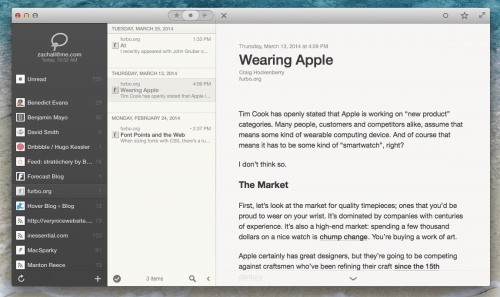 The developers have replaced Google Reader syncing with modern alternatives: Feedbin, Feedly, Feed Wrangler, and Fever, the same as on the iOS apps. You can also use the app independent of any web service.

This blogger runs Windows, and cannot test the app. Have you tried it? What do you think?