has long offered schools several hardware choices including both a tablet option and a laptop option, and earlier this week they combined the two with the launch of a new keyboard dock.

The Intel Education 2 in 1 combine’s Intel’s existing 10″ educational tablet with a new dock. The dock adds an optional 3 hour battery life as well as a trackpad and a full keyboard, but I cannot find info on whether it also adds other features like ports or card slots.

The Intel Education 2 in 1 is powered by a quad-core Intel Z3740D CPU, runs Windows 8.1, and provides up to 7.8 hours of battery life. Like its tablet predecessor, it features a stylus, a temperature sensor probe, and a snap-on magnification lens that turns the camera into a microscope. 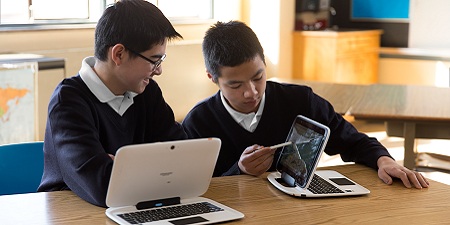 The dock is designed to attach to the tablet both in regular laptop mode and in a reversed presentation mode. The tablet can also be folded down so it lies flush with the dock, which includes a carrying handle.

Like the tablet, the dock has been ruggedized to withstand the worst that kids can do to it. It can withstand drops of up to 70 cm and is water and dust resistant. When attached to the tablet, it can be dropped as much as 50 cm and shrug it off.

The Intel website has been updated with details about the new device, and it would seem that the Intel Education 2 in 1 is going to replace the Windows laptop Intel launched in January 2014. All mention of that device has been removed from the Intel website. Curiously enough there is no mention of Intel-based Chromebooks (this is new).

Apple has convinced the unwary that tablets are the future of education so it might sound odd that Intel would launch a dock, but it makes sense to me.

The second most widely distributed educational device in the US (after the iPad) is the Chromebook, and that is only available as a laptop – with a keyboard. And even when I read of tablets being distributed in schools, more often than not a keyboard is handed out at the same time.

The one to one iPad program in the LA schools was going to include handing out a keyboard case with each iPad, before the programs was scaled back and delayed. And the troubled Amplify program in Guilford county schools in North Carolina also included keyboards along with the Amplify tablets.

Intel is clearly responding to what educators and students need while giving them the best of both worlds. By combining a tablet with a keyboard dock, Intel can combine the portability of a 10″ tablet with the functionality of a laptop.

This might not appeal to everyone, but even in the consumer market it has found a niche. Many tablet makers, including Asus, Acer, HP, and more, offer a keyboard dock for at least one of their tablets.