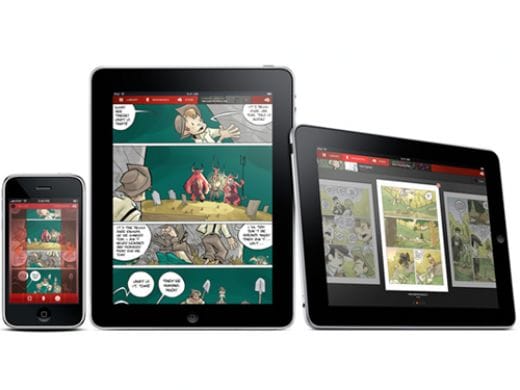 ignited a storm of protest when they rolled out a new update yesterday for the Comixology app for iOS. This update did little more than remove the in-app store, forcing comic fans to leave the app to buy new content.

This has many people quite upset, including Gerry Conway. This comics icon guest-posted an editorial earlier today over on comicbook.com where he argues that Amazon removed the store on purpose. According to Mr. Conway, Amazon wanted “to advance their proprietary hardware platform, the Kindle, at the expense of Apple’s platform, the iPad and iPhone”.

Mr Conway makes a number of arguments in his post, most of which I disagree with, and so I thought I would take a few minutes today to respond.

Sidenote: I am not going to address Mr Conway’s points about attracting the casual reader or how this might fragment the market into publisher specific apps. I think they’re worth your time, and I would like to know what you think.

Let’s start with the big one:

Amazon did this. It did it for one reason, and one reason only: to advance their proprietary hardware platform, the Kindle, at the expense of Apple’s platform, the iPad and iPhone. They have deliberately degraded the iPad and iPhone Comixology app so that users of the Kindle will have a better reading and purchasing experience. That’s all this is about. They’ve destroyed the future of digital comics to give an advantage to their hardware platform — and, in passing, to leverage their control of digital comics distribution to do to comic book stores what they’ve already done to brick-and-mortar book stores.

To start with, he’s wrong about Amazon killing bookstores; indie bookstores appear to be going through a resurgence (ask anyone). Even Salon.com, a site which is infamous for its loathing of Amazon, recently conceded the argument.

But that’s a relatively minor point; let’s skip to the big one. Mr Conway would have you believe that Amazon hurt the Comixology app in order to bolster the Kindle platform. That argument falls apart on any number of points.

For one thing, the Comixology Android app still has an integrated store. If Amazon’s aim was to harm digital comics then their accuracy is only 50-50.

His argument also fails when you square it up against the Kindle apps for PC, Android, and OSX. Amazon has long treated the Kindle apps as being equally important as the Kindle hardware, giving the apps regular updates so they gain the same features as the Kindle ereaders and Kindle Fire Android tablets. Also, you can buy Kindle ebooks from inside the apps.

In fact, in some ways the Kindle iPad app is actually better than the Kindle hardware. Even Mr Conway said as much:

@thDigitalReader Actually, ironically, the Kindle app for the iPad is better in some ways than the Kindle hardware. But NOT equal.

In a later tweet Mr Conway goes on to argue that:

@thDigitalReader You can buy books directly on a Kindle, you can’t buy direct on the Kindle app. That’s a fact. My argument stands.

I would say that the foundation for this point falls apart when we consider the fact that we can buy ebooks in the Kindle Android app and the Kindle for PC app (also the Comixology Android app). In fact, it is only the iOS apps that lack the option to buy ebooks from inside the app, and that should make you ask exactly why the iOS app is singled out.

Amazon doesn’t want to pay the Jobsgeld (hat tip to Chris Meadows for inventing the term). Apple took a 30%  cut of any sales made in the Comixology app, leaving only 70% to be split between Comixology and the creators.

This brings me to the next point where I disagree with Mr Conway:

What Mr Conway neglects to point out is that Amazon pays Kindle authors 70% (less certain fees), whereas Apple was paying Comixology 70%, only half of which (35%) was passed on to creators.

As you can probably tell by now, Mr Conway and I do not see eye to eye on very many points, the least of which is the analogy which he uses to justify Apple taking a cut:

What Amazon is doing is finessing Apple’s deal with developers by providing an app for free, yet not paying Apple’s fee for the privilege. In effect, Amazon is a store owner in a mall who isn’t paying rent to the mall owner.

In this analogy the “mall” would be the iPad, at which point the analogy falls apart.

You see, Apple doesn’t own the mall; I do. I bought my iPad. Apple may have built the mall, but I own it now and I do not see a reason why Apple should get a cut of sales of content I buy from other vendors.

Sure, if I buy content via Apple they deserve a cut. After all, they are processing the payment, delivering the content, and providing support. But when I buy content from the Kindle Store, Apple is not facilitating the transaction. So why should they get a cut, I ask you?

Now, I’m sure someone is going to point out that Apple was processing the payments for Comixology. I don’t know if that is true, but I do know that mere payment processing doesn’t merit a 30% cut. Paypal charges around 5%, and Gumroad takes an even smaller cut, so even if Apple deserved a share it should be a heck of a lot smaller than 30%.

This post is getting rather long, so I am going to wrap it up with one final point.

Mr Conway argues that Amazon harmed the Comixology app in order to bolster the Kindle hardware.  Given that Amazon doesn’t generate a profit on their hardware, they have little reason to try to force comic readers from one device to another.

Bezos said Amazon does not make money on the devices themselves, but the company does hope they will usher users toward Amazon’s main business: creating and delivering digital content, like Kindle e-books, movies, TV shows, and music.

“We think we’re better aligned with our customers if we make money when people use our devices, not when they buy them,” he said. (source)

Amazon makes their money from selling content, which  is why the Kindle apps are given as much attention as the Kindle hardware. With that in mind, it makes little sense for Amazon to damage a successful app in favor of its hardware.

Amazon wants to make money. That is their sole obsession, and if they thought they could make more money by paying off Apple then they would be paying the Jobsgeld.