Onyx has long been in the habit of launching their newest hardware in Russia first (and often times in Russia only) so it should probably come as no surprise that their first ebook reader with a 6.8″ screen first made an appearance there. 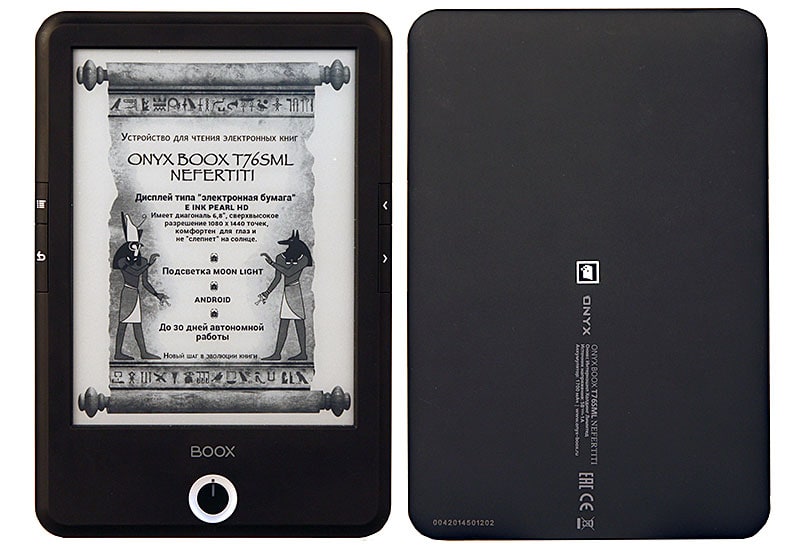 The Onyx Boox T76SML Nefertiti might have a confusing name but it is for all intents and purposes a cut-down version of theT68 ereader that Onyx has been teasing us with.

Weighing in at 238 grams, this device is heavier than most ebook readers but still lighter than many tablets. Its 6.8″ screen has the same resolution as the Kobo Aura HD (1440 x 1080), but the Nefertiti doesn’t have quite the same screen as that older ereader. The press release indicates that the Nefertiti has a frontlight, but not a touchscreen. Interactions with the ereader are limited to the page turn buttons and the d-pad.

Onyx has in the past released models in the Russian market sans touchscreen, so that last detail comes as no surprise. It’s disappointing, yes, but not a surprise.

Like past Onyx ereaders, the Nefertiti supports a wide range of ebook formats, including Epub, PDF, Mobi, PDB, CHM, and FB2. There’s no mention of audio support, but this ereader does support doc formats including Doc, html, txt, and RTF.

The Onyx Boox T76SML Nefertiti is available now from Onyx’s local retail partner McCenter with a retail price of 8990 rubles (about $261 USD).