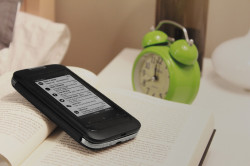 If you are in the market for a case which adds a second E-ink screen to your smartphone then you might want to head over to Kickstarter tout suite. There’s a funding campaign going on right now which is already oversubscribed and is about to run out of prizes.

A certain quietly reputable ereader design firm launched a Kickstarter project this morning to fund their next product. Oaxis is taking their expertise in devloping gadgets with E-ink screens and turning it towards a new product category: smartphone cases.

A number of smartphone cases with E-ink screens have been announced over the past few years, but they all shared one flaw: each case was designed to fit a certain model smartphone. Given that there are hundreds of models on the market, this is something of a troubling problem – one which Oaxis has solved.

Initially announced in February 2014, the Inkcase Plus is designed to be a modular product. It combines a 3.5″ ereader (with a speaker and Bluetooth) and a smartphone case. The two parts are designed to snap together like so (click the image to see an animated gif):

The ereader unit is reversible, and can be mounted facing in either direction.

As I told you back in February, the ereader component sports a 3.5″ Mobius E-ink screen with a screen resolution of 360 x 600, or around 200 ppi. (Or at least that is what the spec sheet said when I put my hands on the device at CES 2014.) The screen, battery, and circuit board are the most expensive parts of the Inkcase Plus, and by separating them into a modular component Oaxis has both reduced the manufacturing complexity and multiplied the number of smartphones they can support.

This is a far better design than the first-gen Inkcase, which was launched last year for the iPhone 5 and Samsung Galaxy Note 2. I reviewed one last fall, and found it to be disappointing, especially in the software department.

If you want to add an E-ink screen to your smartphone then this is the project to get behind. Unlike PopSlate, which has been around for a couple years without shipping a damned thing, Oaxis has a history of producing and licensing their hardware designs. its partners include many different companies in the US, Europe, and around the world.

But Oaxis doesn’t have such a good record when it comes to software, and that could be the one area where the Inkcase Plus falls down. According to the Kickstarter page, the Inkcase Plus can act as an ebook reader, display notifications and photos, and interface with sports/fitness apps (the data is sent over Bluetooth). The model I reviewed last fall didn’t work nearly well enough to justify its $99 price tag, but almost a year has passed so there’s a good chance that the software has been expanded and improved.

But we’ll have to wait for hands-on reports to be sure. The Inkcase Plus is scheduled to ship in October 2014.