The Dutch ereader retailer Icarus is back again today with their second device launch in as many weeks.

Icarus is launching a 9.7″ ereader called the Excel 2. It improves on the model launched last year with a faster CPU and more RAM, but it is still unfortunately using the same screen and touchscreen panel.

In short, the Icarus Excel 2 is a rebranded Onyx Boox M96 and thus has the same limitations (no frontlight, undesirable touchscreen, etc). Like the M96 Universe which was announced earlier this month, the new Excel is on my don’t buy list.

Here’s why I recommended avoiding the M96: 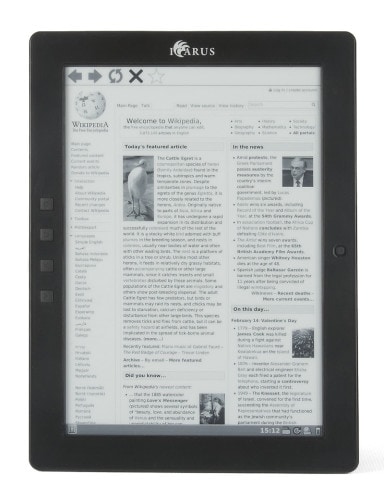 To put it simply, the M96 Universe is hobbled by the fact that it is really an updated version of an older Onyx ereader – one that was developed before frontlights and capacitive touchscreens were readily available.

As I reported earlier, I would suggest you get the T68 Lynx. I reviewed it a couple weeks ago, and I have found it possible to turn it into a nifty little E-ink Android tablet.

Of course, that is simply my opinion which is an opinion and not a decree.

But if you do get the larger ereader I would recommend buying the M96 Universe, and not the Icarus Excel 2. I plan to avoid buying from Icarus because I have had a couple bad experiences with their retail operation.

The M96 Universe is sold by Arta Tech, a Polish company, and can be pre-ordered from Onyx-Boox.com for 309 euros. That alone makes it a better buy than the Icarus Excel 2, which is going to sell for 399 euros.