The Pew Research Center regularly polls the American public on their reading habits, but until now we had far less information on how people listen to audiobooks.

A couple days ago Book Riot released the results of their latest Great Audiobook Survey, and it shows that the listening public differs significantly from the reading public.

Based on a pool of 1030 voluntary responses, the survey told us a few expected details like digital audiobooks being the dominant format (75%), or that listeners get their audiobooks from the library (48.7%) and from Audible (35%), but it also revealed a few surprising details about the number of audiobooks  that the respondents consumed in the past year.

The vast majority of respondents (96.4%) had listened to an audiobook at some point, and nearly as many (89.7%) had listened to one in the past year. The respondents reported listening to an average of 17.5 audiobooks per year, but the distribution of titles per listener was different from what I had expected.

Before I reveal the Book Riot data, here’s what the Pew Research Center reported in their latest survey on how many books Americans said they read in the past year. I don’t have a chart, but as you can see the number of books read is not terribly inconsistent across the categories: 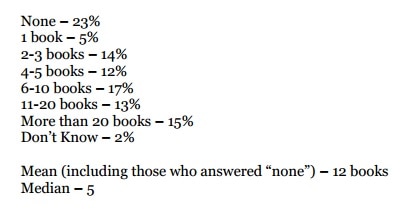 Just to put this into perspective, PRC also reported that 19% of the 77% who had read a book had listened to an audiobook( ~ 14.6%). I’m pointing that out specifically because the data from Book Riot shows that their respondents were concentrated among the heavy readers/listeners: 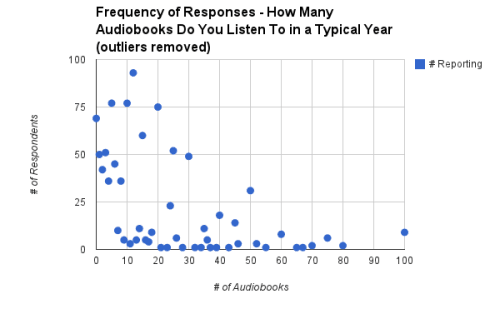 The average audiobook listener consumes far more audiobooks than the average reader. In some ways this isn’t a surprise given that you can listen to an audiobook in situations where you cannot read a book, but it is still interesting to see that audiobook listeners are showing the same propensity as ebook readers to be heavy consumers of books in one form or another.

A recent Harris Poll (and past anecdotal reports) showed that people who read ebooks consumed more than those who did not. This comes as no surprise, just like the dominance of digital audiobooks comes as no surprise. Heavy readers switched to ebooks because of the convenience of carrying around many books at once in a minimal space, and the same convenience factor applies to audiobooks as well (even though the file sizes are significantly larger).

But what I find most interesting about the Book Riot survey is what it says about market data. According to the AAP, audiobooks accounted for less than a tenth as many sales in 2013 as ebooks. That suggests that listeners are borrowing more than buying.