The Boyue T61 is a 6″ ereader which runs Android 4.2 on a dual-core 1GHz CPU with 512MB RAM, and 4GB internal storage.  It’s the OEM version of the Illumina from Icarus, and it costs only half as much.

It sports a 6″ Pearl HD E-ink screen with a touchscreen, a (splotchy) frontlight, Wifi, a microSD card slot, a cover, and not much else. (It didn’t even come with a retail box, but was packed in a plain styrofoam box.)

This nifty device arrived on my doorstep on Tuesday, but I held off from writing this post because I wanted to get a few things done first. Alas, neither worked, so there was no reason to delay. 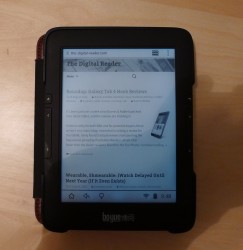 What should I do next?

As per a reader request, I am opening up the floor to suggestions for what I should install on it. I last tried this with the Onyx Boox T68, and that post came out well. This post will probably not have as much success.

While I am open to request for apps to install, I also have to add a caveat. My Boyue T61 does not an appstore. I did install both Google Play and the Amazon Appstore, but neither has successfully connected to their respective servers.

I’m not sure what the problem is, and I am stalled at the moment. But I haven’t given up, and I plan to keep working on this issue over the holiday weekend.

It’s a cute little device, but I am glad I didn’t spend more than $99 on it. It’s pretty fast and the software seems to be running well, but the frontlight is noticeably splotchy – like 2012 era Kindle Paperwhite splotchy.  Newer ereaders like the 2013 KPW and the Onyx Boox t68 have a much more even frontlight.

When I combine the frontlight and the lack of an app store, I am really glad that I didn’t spend any extra to buy the rebranded model from Icarus.

So what should I do next?