The major ebook platforms might be focusing on Europe and the larger countries in Asia, but that’s not the whole of the industry.

Smaller local independent ebook efforts like Ookbee in southeast Asia, Kalahari.net in southern Africa, and now WeRead in Nepal, are focusing on markets and languages which haven’t drawn the attention of the big boys.

WeRead, a  service which just launched last week, was developed by the Bangalore-based children’s publisher Kathalaya. With apps available for both Android and iOS, WeRead features books by Nepali writers and publishers, and has a catalog in English, Nepali, and other regional languages supported by the Devnagari script. (According to Wikipedia, other languages that use this script include Sanscrit, Hindi, Marathi and other languages commonly spoken in India.) 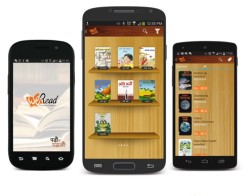 “Initially, we thought of developing the app keeping in mind Nepali readers who live abroad, because sending books outside the country generally involves a lengthy process. But now, we’re also targeting youths who are always using their smart phones and tabs so that we can promote reading habit among them,” said Rajivdhar Joshi, Chief Executive Officer of Kathalaya.

WeRead launches with 28 titles from Kathalaya, as well as additional titles from other publishers. It currently offers apps for Android, iPhone, and iPad, and plans to release a reading app for PCs shortly.